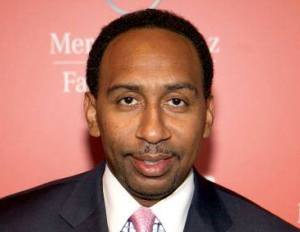 According to TV Guide, ESPN has suspended Stephen A. Smith due to his comments on domestic abuse. On a showing of ESPN’s “First Take” last week, Smith gave an opinion that Ray Rice’s wife, Janay Palmer, could have prevented the attack from her then-boyfriend, Ray Rice. The discussion was met with widespread criticism, especially on social media.

“What I’ve tried to employ [with] the female members of my family—some of who you all met and talked to and what have you — is that … let’s make sure we don’t do anything to provoke wrong actions, because if I come — or somebody else comes, whether it’s law enforcement officials, your brother or the fellas that you know — if we come after somebody has put their hands on you, it doesn’t negate the fact that they already put their hands on you,” he said.

He did apologize with this statement, “On Friday, speaking right here on ‘First Take’ on the subject of domestic violence, I made what can only amount to the most egregious error of my career,” Smith said. “My words came across that it is somehow a woman’s fault. This was not my intent. It is not what I was trying to say.”

He’s suspended by ESPN until Aug. 6.