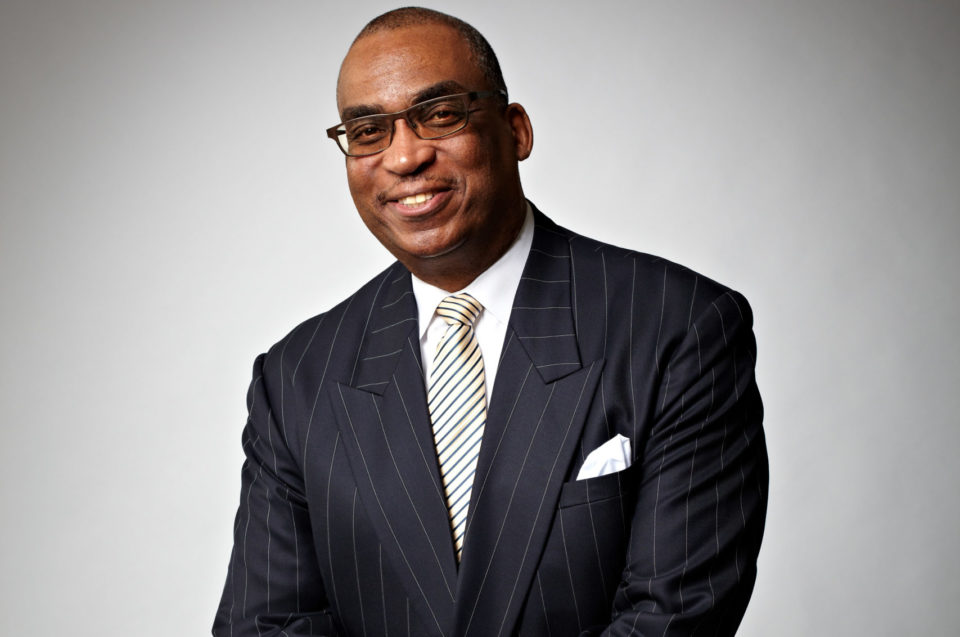 With just one day away, former Harvard Business School professor Steven S. Rogers will moderate at the Small Business Summit hosted by BLACK ENTERPRISE. The complimentary event takes place on May 6, is virtual, and kicks off at noon EST with welcome remarks from BE President and CEO Earl “Butch” Graves Jr. This is not an event to miss out on.

At 3:45 p.m., speakers David Miree, head of Consumer & Small Business Banking Diverse Customer Segments for Wells Fargo, and Amanda E. Johnson, co-founder and COO of Mented Cosmetics take the main stage as panelists. The pair will discuss “How Your Business Can Profit from Diversity, Equity & Inclusion“ to enlighten Black companies on how they might benefit from the wave of corporations who made a commitment to invest in the advancement of Black businesses through growth and development.

Rogers joins them as the panel moderator. Rogers, who authored A Letter To My White Friends And Colleagues: What You Can Do Right Now To Help The Black Community, is an expert in Black business and money. Read an excerpt from the upcoming book below. 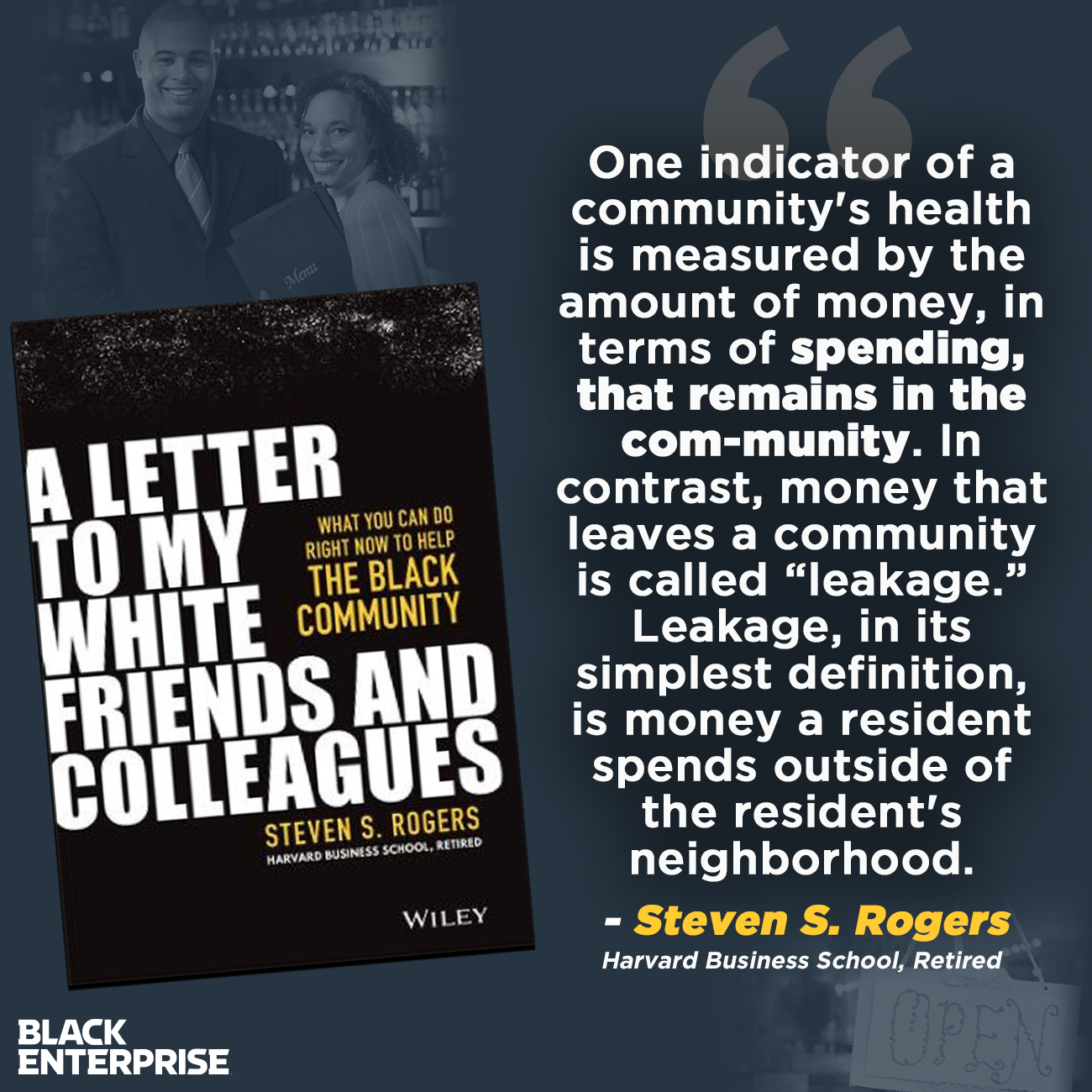 The Importance of Black-Owned Businesses

Two people who are likely to gain wealth as a result of public support of Black entrepreneurs are Sergio Hudson and Christopher John Rogers. Both men own their own clothing design companies. Vice President Kamala Harris wore clothes they designed at the 2021 presidential inauguration. This was a very intentional choice made by the vice president. As Paul Cobler, the reporter for the Advocate, wrote, “she made it a point to wear clothes by Black designers.”4 The positive financial impact on their companies was best explained the day after the inauguration by Alison Bringe, the chief marketing officer of an analytics company:

“When Christopher John Rogers showed his spring collection at New York Fashion Week, the brand generated just over $1 million, while yesterday’s events accumulated upward of 8 times that – in less than 24 hours.”

One indicator of a community’s health is measured by the amount of money, in terms of spending, that remains in the community. In contrast, money that leaves a community is called “leakage.”

Leakage, in its simplest definition, is money a resident spends outside of the resident’s neighborhood. In many cases, relevant goods and services are not available locally in Black communities. Based on analysis done by economists and economic development think tanks, a healthy community retains about 73 cents of every dollar. These economic and demographic facts help identify the necessity and benefits of Black-owned businesses in Black communities, and why we need to grow them.

A great example of money not “leaking” out of the Black community is demonstrated in the actions of one Black owner of Brown Sugar Bakery in Chicago. The money she earns from sales gets put right back into the 75th Street Boardwalk’s local economy. She buys her employees meals at Lem’s BBQ across the street. Next door to Lem’s is the dry cleaners she uses, and beside her bakery is a shop where she buys clothes.

Black-owned businesses also help to make Black communities safer. Chicago Tribune columnist Clarence Page reported that Black men ages 18 to 24 will commit four times as many crimes as White men the same age, but when the research was controlled for the factor of employment, the difference virtually disappeared! These facts suggest that unemployment and poverty, not race, are most likely factors that underlie and create crime.

Therefore, the relevant question is “Who are the likely employers of young Black men and Blacks generally?” Resoundingly, the answer is Black entrepreneurs. If we look to strengthen Black communities, we need more Black-owned businesses. And, given their contributions to the economic, social, and cultural health of Black communities, Black businesses presently in operation need entrepreneurial and financial support to grow so that they can create more jobs. The simplest way for you to help Black businesses grow is to become a regular customer, buy their products, or use their services.

The employment practices of Black-owned businesses compared to White businesses, as it pertains to Black people, is striking and best highlighted in the research of Dr. Timothy Bates. In his book Banking on Black Enterprise, Bates uses a table to highlight employment practices that are quite revealing (see Table 5.1). Bates’s research clearly shows that the race of a business’s owner matters as to who will be employed. Even White-owned companies in Black communities will employ far fewer Blacks than Black-owned companies located in White communities.

An example of this phenomenon occurred in a predominantly Black Austin community in Chicago. At one time, there were over 3,000 small White-owned manufacturing firms in that community employing 100,000 workers. However, although over 90% of the residents were Black, only 8% of those local Black residents were employed in those firms.

My personal observation of this employment practice happened last year during a visit to New Haven, Connecticut. I patronized a restaurant for breakfast in a predominantly Black community. The place was packed with only Black customers, but something seemed odd to me. None of the waitresses, waiters, cashiers, cooks, or busboys were Black; all were White. This reminded me of an episode of Seinfeld where the character Elaine noticed that all of the waitresses had similar body types. She complained to the male owner that he was discriminating against women with other body physiques. His response was, “These are all my daughters!” With this in mind, I asked to speak to the owner, who was a White man. The first thing I asked was, “Are all of the employees your relatives?” He responded, “No, why do you ask?” I then asked, “Do you have any Black employees who are not working today?” He answered, “No. And I see what you are asking! Please leave my restaurant now!”In contrast, a predominantly White community that reflects an understanding of the productive relationship between Black business ownership and Black employment is Yellow Springs, Ohio. In December 2020, the city announced that it was selling the Miami Township Fire Station to comedian David Chappelle, who plans to convert the property into a 140-seat comedy club. Chappelle lives in the city. The city’s press announcement included the following statement: “We think this will bring a new class of jobs to town. We also considered that [Chappelle] is a minority business owner, he has a history of employing minorities and he is a person who has a clear commitment to amplifying voices of color.