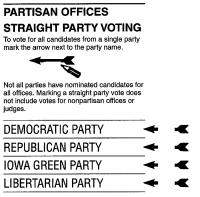 Americans all over the country are wondering about the validity of a rumor that was forwarded to voters by e-mail in several states. It warned that if voters choose to cast a straight-ticket or straight-party ballot, they could inadvertently not vote for president of the United States.

Presidential candidate Sen. Barack Obama also warned voters at a rally in North Carolina Oct. 29 about straight-ticket voting. “When you do vote, you have to vote in two steps–one for president, and one for the rest of the ticket. If you vote for a straight ticket, you have not voted in the presidential election. You need to vote for president separately,â€ Obama said.

His instructions were accurate for voters in North Carolina, but in other states that offer straight-ticket voting, that advice is incorrect. Straight-ticket voting is allowed in 15 states, but only one state, North Carolina, actually decouples the presidential race from the other races on the ballot. Oklahoma ballots are broken up into four sections–presidential, congressional, statewide races, and county and local races–and voters can vote straight party tickets for each section if they choose.

The Obama campaign set up a Website listing the states that offer straight-ticket voting and explains how voting in North Carolina differs from the other straight ticket states.

“There are clear instructions in all of these states as to how voters should go about making their selection for president [first] and then vote for down ballot candidates,â€ says Donna Brazile, a strategist for the Democratic Party. “The voting education is there but, as always, we are [making sure they understand by] doing radio spots and day-to-day communications on the ground as we canvas those communities.â€

Individuals who do not wish to vote along party lines for every office on the ballot can vote normally. Some people prefer to vote by straight ticket because they are highly affiliated with one party and it saves time, compared with casting a single vote for each office.

Recently, voters who were worried that their vote for the presidency wouldn’t count went back over their ballot to mark or select each individual office. With the exception of North Carolina, it is not necessary to make individual partisan office selections after selecting a straight-ticket vote.

Unfortunately, this type of “emphasis votingâ€ made matters worse during a 2006 election in Texas, where touch-screen computers counted 1% of the votes wrong when voters chose the straight ticket option.

On a touch-screen voting machine, reselecting each vote after already casting a straight-ticket vote will deselect the original vote, resulting in a vote for no one, says Larry Norden, an attorney at the Brennan Center for Justice, a non-partisan public policy and law institute.

“If there is a very close race, all of these things can add up and make a difference,â€ Norden says. “We learned that from the 2000 [presidential] elections in Florida.â€ In that election, flawed ballot design and voter error allowed President George W. Bush to beat