Students Raise $3,000 Worth of Can Tabs to Help Pay for Classmate's Surgery 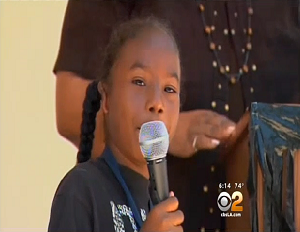 The students at Ridge Crest Elementary School in California are proof that you’re never too young to rally around a worthy cause.

Coming together to help pay for a classmate’s ear operation, second graders at the Monroe Valley school collected more than 30 gallons of can tabs, worth nearly $3,000, to help fellow peer Amir Walton repair his ear.

“I am thankful for the school to do this for me,â€ CBS Los Angeles reports Walton saying to his classmates. “Thank you guys for my tabs for my ear.”

Walton was born without a fully formed right ear, reducing his hearing to only about 20 percent. While the surgery, which cost around $40,000, likely won’t help with Walton’s hearing ability, it will help his right ear to look just like his left.

“My initial thought is to cry. I’m so emotional about it. It’s breathtaking,” said Amir’s mother.

Watch the video below of the special ceremony that Walton’s classmates held for him and his family as they presented him his cans.