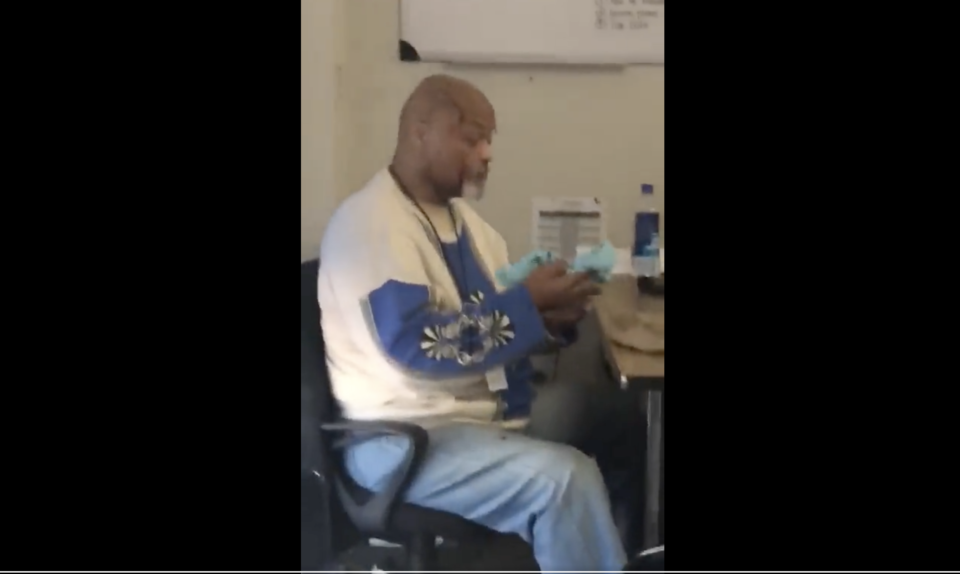 In a video that has swept the internet, sparking outrage at how a substitute teacher in Dallas, Texas was treated A student is seen throwing a heavy classroom metal chair and striking him on the head.

A letter from Dr. Larry Lewis, interim superintendent of schools at the DeSoto Independent School District of Texas, confirmed the DeSoto West Middle School altercation that occurred on Wednesday between several students and the substitute teacher.

Video and pictures are making their rounds on social media of the incident, where after the chair is thrown at the teacher’s head, he retaliates by throwing two chairs of his own, both missing the student, MEAAWW reports.

The teacher then goes to sit down while the students attacking him leave, to wipe the blood streaming down his face. Amidst the chaos, the rest of the kids in the classroom are heard screaming and laughing.

INSANE: A teacher and students get into a fight in a Dallas middle school and throw chairs at each other pic.twitter.com/fhaqgEzIu9

In a Facebook post by the DeSoto Police Department, they said, “All sides of the incident are currently under investigation. In response to the videos, tomorrow there will be a larger police presence at Desoto West to prevent any further incidents. The safety and security of the children and staff members is a top priority.”

Per a DeSoto ISD representative, the students initiated the attack, and injured the sub to the point of paramedics being called to the scene. Besides what is seen in the video, the district did not further comment on the reason for the argument, punishment for the students, or if any students were held by police.

Many commented on social media that parents of the unruly students should be charged on behalf of their child to have some sort of repercussion for this type of behavior. Another user commented, “He’ll get fired and chargers pressed. Kid will get 3 days of suspension and 10 days ISS. He’s definitely wrong but these kids are out of control man. There’s no true consequences for their actions.”