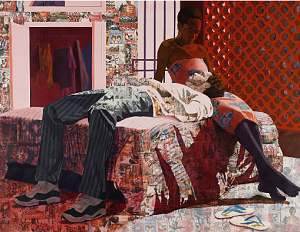 The $50,000 award recognizes the achievements of an African American artist and is one of the most significant honors given to artists today. The prize was established in 2006 by jazz impresario, musician, and philanthropist George Wein in honor of his late wife, who dedicated her life to the power and possibilities of art and culture.

“The Joyce Alexander Wein Artist Prize, now in its tenth year, is an amazing opportunity to provide meaningful support to an African American artist of great innovation and promise,â€ said Director and Chief Curator Thelma Golden. “Selecting Njideka Akunyili Crosby this year was especially meaningful, as she is an alumna of our signature Artist-in-Residence program and truly represents the global nature of the Studio Museum’s mission and reach.”

Crosby was born in Nigeria in 1983 and earned her bachelor of arts degree from Swarthmore College in 2004 and her master of fine arts from Yale University School of Art in 2011. Her work is inspired by her Nigerian heritage and life in the United States, and is often created by incorporating paintings and photographs of herself and her family along with images of Nigerian fashion and lifestyle magazines. Her work is currently on display in Los Angeles at the Art + Practice Exhibition and the Hammer Museum.

Among her great work and many accomplishments, Crosby was been awarded the Smithsonian American Art Museum’s James Dicke Contemporary Art Prize in 2014 and was a participant of The Studio Museum in Harlem’s Artist-in-Residence program in 2011-2012. Her work has even been exhibited at several venues, including the Bronx Museum of Arts, the New Museum in New York, the Nasher Museum of Art at Duke University, the Museum of Africa Diaspora in San Francisco, and many more. In 2016, she will also have solo exhibitions at the Norton Museum of Art in West Palm Beach, Florida, and the Victoria Miro Gallery in London.