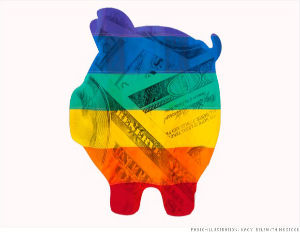 A new study by Prudential shows that gay people are better at managing their money than the average American.

About 1000 LGBT respondents participated in the study andÂ not only reported significantly higher annual incomes — $61,500 compared with the national median of $50,054 — but they also carried about $4,000 less debt than the average American and had $6,000 more in household savings.

They were more likely to be employed too, with an unemployment rate of 7% versus the national rate of 7.9%.