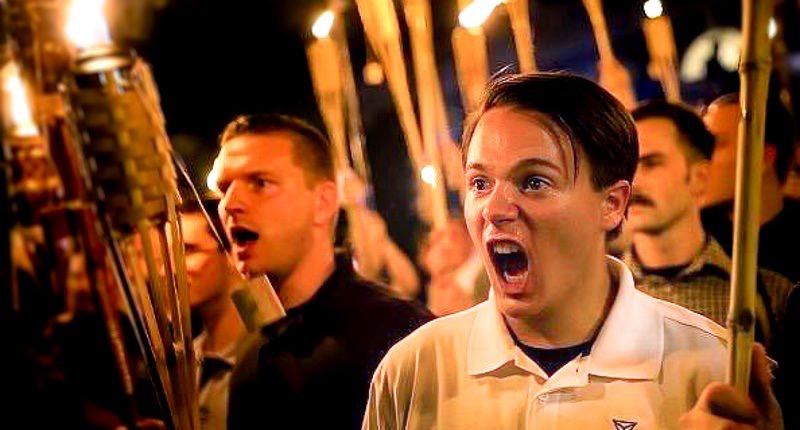 A group of white nationalists protest in Charlottesville, NC, in August 2017. (Image: Twitter/@RonLaw65)

Despite President Donald Trump‘s claims that leftist groups are causing violence, new research has found that there have been zero deaths attributed to such groups while white supremacists and right-wing extremists have killed and harmed dozens of people over the past 25 years, according to mic.

Based on findings from the Center for Strategic and International Studies (CSIS), “in 14 of the 21 years between 1994 and 2019 in which fatal terrorist attacks occurred, the majority of deaths resulted from right-wing attacks. In eight of these years, right-wing attackers caused all of the fatalities, and in three more—including 2018 and 2019—they were responsible for more than 90 percent of annual fatalities. Therefore, while religious terrorists caused the largest number of total fatalities, right-wing attackers were most likely to cause more deaths in a given year.”

It found that in the past 25 years, right-wing extremists have killed 329 people.

“Left-wing violence has not been a major terrorism threat,” Seth Jones, the researcher who led the creation of the database, told The Guardian. “The most significant domestic terrorism threat comes from white supremacists, anti-government militias, and a handful of individuals associated with the ‘Boogaloo’ movement that are attempting to create a civil war in the United States.”

Visit @CSIS_Threats‘ database of nearly 900 politically motivated attacks and plots in the United States since 1994 that found the most significant threat likely comes from white supremacists.https://t.co/IuixeeEs0e pic.twitter.com/BWkTrizQmg

Although Trump has been touting the false claims in relation to the violence being done by leftists groups, the stats tell a different story.

Just earlier this month, USA Today reported that peaceful protesters were hit by cars 66 times at Black Lives Matter protests since George Floyd was killed by police in May.