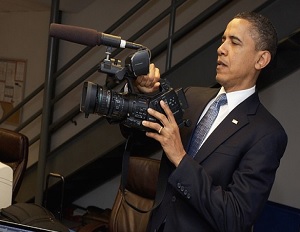 Attention all young and aspiring film makers who are looking for a platform to showcase their work!

The White House has announced that from now to February 2nd they are accepting applications for its upcoming Student Film Festival. The theme for this year is the impact of giving back and the competition is open to U.S. students grades K-12.

In order to qualify, students must tell a story about community service or what making a difference looks like in their eyes, turn that story into a short film that’s no longer than three minutes and upload that video to YouTube. Once that’s done, participants must fill out the online submission form by 11:59pm EST on February 2, 2015 in order for their work to be showcased during the festival.

This year’s event marks the second year that the Obama administration has partnered with the American Film Institution to bring the Student Film Festival to the White House. Last year’s theme was the power of technology in education and thousands of students submitted their short films for an opportunity to not only travel to the film festival, but also have their work featured on the White House website, and have their project shared across White House social media platforms.

To learn more about how you or your child can be a part of the White House Student Film Festival visit whitehouse.gov/filmfestival.