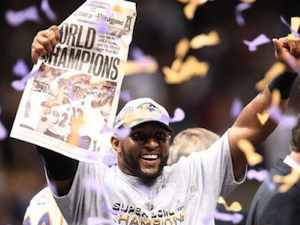 At a time when newspapers can use any free marketing and publicity they can get, one particular player holding the front page of the local newspaper had special significance Sunday.

Baltimore Ravens LB Ray Lewis, playing in his last professional game, was pictured yesterday holding a mock front page the New Orleans Times-Picayune with the headline “WORLD CHAMPIONS.” It was perhaps the defining photograph of the postgame celebration following the Baltimore Ravens 34-31 win over the San Francisco 49ers.

A spokesperson from the newspaper was not immediately available. But the Times-Picayune, an award-winning newspaper, controversially switched to publishing just three times a week beginning last September. Its owner, Advance Publications, said that it would dedicate more resources to the digital operation, but ceasing to print a daily edition marked the end of an era — one ironically capped by award-winning coverage of Hurricane Katrina.

Sunday’s was great exposure for the paper. CBS said Monday that 164 million watched some or all of the Super Bowl. It was not clear how many visited NOLA.com, the paper’s website.

Lewis, meanwhile, has never seen a camera or a microphone he didn’t like. And finally, holding the newspaper of record of one of the great American cities, he gave back.