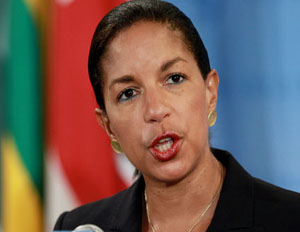 According to reports, President Barack Obama has named Susan Rice to succeed Tom Donilon as national security adviser. She is set to take the post in July.

Donilon was a key foreign policy power player for the Obama administration, but has been speculated to be leaving this year.

Rice was on the short list to replace Hillary Clinton as U.S. Secretary of State, but withdrew her name from consideration to avoid distracting Congress with a messy confirmation hearing. Rice recently came under fire during investigations into the Benghazi attacks. Her latest appointment, which does not require Senate confirmation, is expected to be met with extreme criticism from the Republican Party.

Rice was the first African American woman to be the U.S. ambassador to the UN and follows Condoleeza Rice as the second black female in history to hold the post, a position that was elevated back to Cabinet level in 2008. The former three-sport athlete and class president is a Stanford University graduate and Rhodes Scholar. In the past, Rice served in the Clinton Administration as director for international organizations and peacekeeping on the National Security Council, director for international organizations and peacekeeping and as a special assistant to the president and senior director for African affairs.

A close friend of President Obama, Rice began working on his 2008 campaign and now has a close relationship with many of his advisers. She is known for taking a definitive stand on human rights issues and has pushed for a more interventionist strategy in Libya.