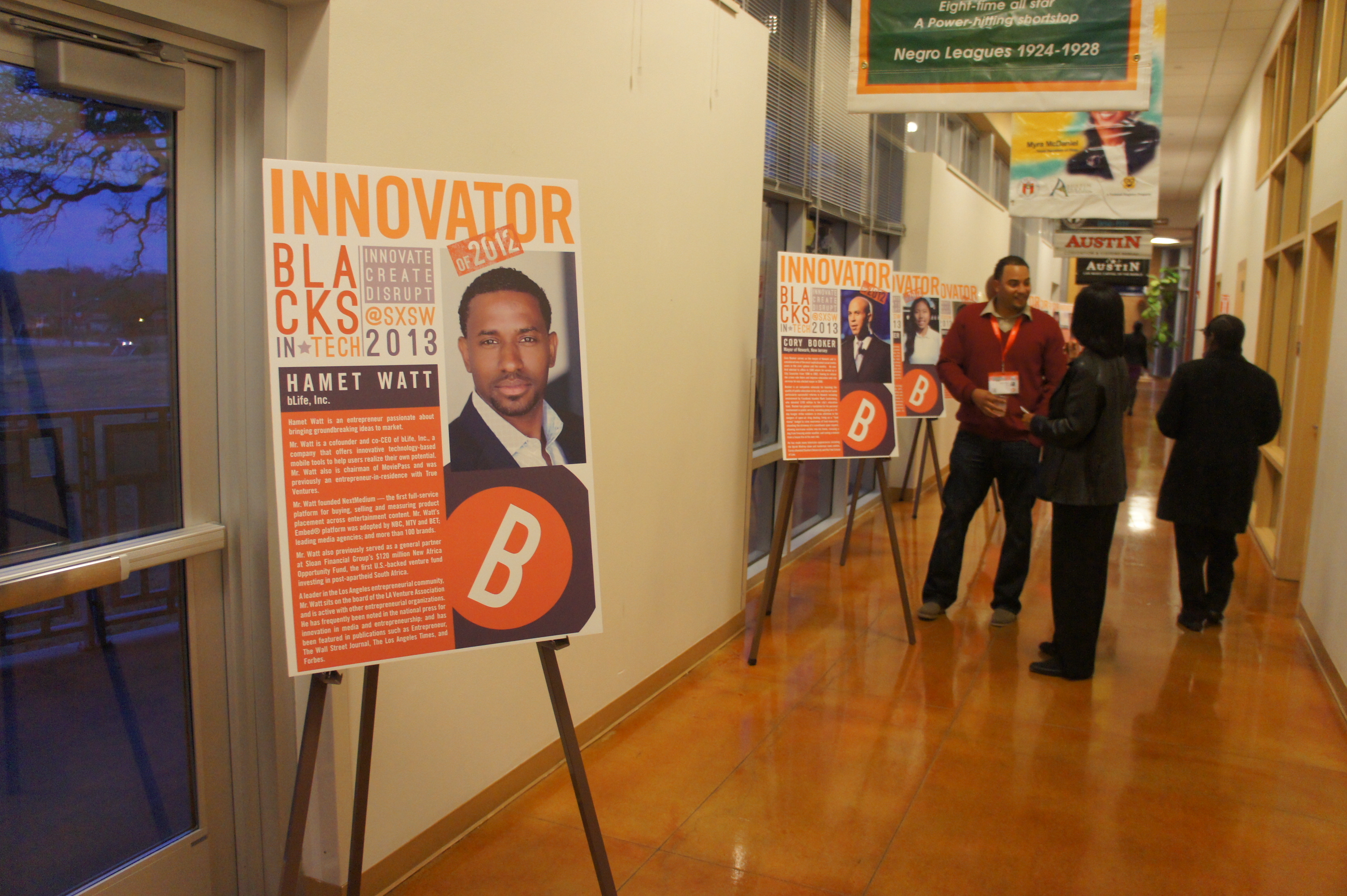 Immediately following Blacks in Technology’s “Ideas Are Worthlessâ€ panel, the organization, which is comprised of technophiles, STEM advocates, and innovators, among other tech professionals, kicked off the weekend festivities at the George Washington Carver Museum in downtown Austin. Drawing over 200 attendees, BiT’s 2013 Welcome Reception offered the perfect opportunity to network with those from the community and across the nation, as well as rekindle old ties with friends from past SXSW conferences.

The space was filled with techies, many who’ve made a name for themselves in the tech arena, but also those simply wanting to support today’s content creators. With one glance around the room, you’d spot Franchescha Ramsey, the comedic force behind Girls Say, founder and CEO at Progress.ly Clarence Wooten, pro-golfer Andia Winslow, and Ayoka Chenzira, an award-winning filmmaker who will show her new work, HerAdventure, during SXSW.

The presenting of the second-annual BiT Top 10 Innovator Awards, which highlights a selection of African Americans that have made a difference in technology over the past year, was a focal point of the evening’s program. Award recipients include innovators like Newark Mayor Cory Booker, Kathryn Finney, tech entrepreneur, television correspondent and blogger; Heather Hiles, CEO of Pathbrite; Kimberly Bryant, founder of BlackGirlsCode; and CTO of Interactive One Navarrow Wright, among others. (Click here for the complete list of award recipients.)

“It’s not enough for me to just do for my own house,â€ said Bryant on founding an organization that helps young women learn to code so they can compete in today’s workforce. “That’s why I started BlackGirlsCode.â€

The evening also served as an opportunity to highlight several local Austin-based youth that are covering SXSW for the very first time. The students, who participate in an after-school program called E4 Youth, are learning the ins and outs of digital technology and social media. With many young minorities being familiar with technology from a consumer standpoint, the program works towards changing that, equipping these young and talented youth with the tools to becoming tech producers. E4 Youth is headed by advertising industry thought-leader Carl Settles, who honored the teens with a short presentation. The students’ hard work isn’t going unnoticed; they are receiving a Gold SXSW 2013 badge and the opportunity to connect with many of the SXSW Interactive attendees.

In order to continue funding their work, the organization has launched an Indiegogo campaign.

And when the night came to a close, people were still buzzing about what the event symbolizes for not only the African American community, but also minorities as a whole.

“This whole thing has been great. Great to see all of these smart, wonderful, and talented African Americans coming together to help highlight our contribution to the conversation around technology,â€ said Xina Eiland, owner and blogger at Eiland Group. —Mary Pryor and Mike Street