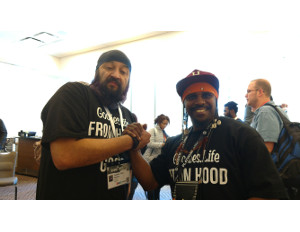 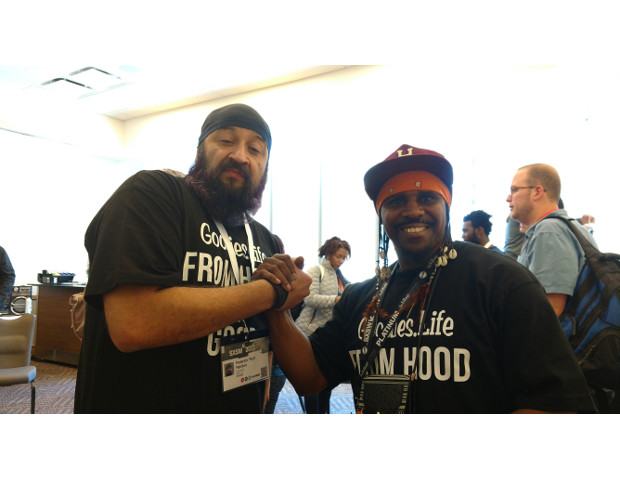 A young man made a very impassioned case about everyday racism at the Hood2Good  meetup at SXSW on Tuesday. “I don’t care if it’s SXSW! I’m still black and I have to worry about cops.â€

His sentiments were understood by others gathered at the meetup at Austin’s annual interactive, music, and film festival. Hood2Good is an organization co-founded by “Weweâ€ Willie Ross and Federico “Rico.” Rendon.

When asked about the inspiration for forming Hood2Good, Ross said, “We were working, just like anybody else, on the corporate plantation. And we came back to the hood and saw [things] in shambles. We saw the need to raise the bar.â€

“We heard the call,â€ added Rendon. “Some people, they made money. They leave the hood they say they’re going to come back to the hood but they’re not doing it,” said Ross.

This is the first Hood2Good meetup to be held at SXSW. The co-founders were encouraged by the turnout for the event and have promised to bring it back next year.

In attendance was a mixture of people; black and white; millennials and older; men and women. One young woman who recently graduated from school spoke about being only one of the three black architects in Austin and the isolation that can bring. Another spoke about her experiences with property ownership and how crucial ownership is to uplift disadvantaged communities.

The co-founders had a unique idea to kick-off the meetup. In the front of the room, there were six pieces of paper taped to the wall. Each had one word written on them: Economics, Education, Transportation, Infrastructure, Police, and Health.

Rendon handed color-coded stickers to everyone in the room; green for the men and red for the women; and asked everyone to place a sticker on what he or she felt was the most critical issue for the inner city. The most stickers were on the “Educationâ€ paper with “Economics,â€ a close second. All papers had stickers, however.

The purpose of this particular meetup is to “bridge the two worlds together; South by and the hood,â€ said Rendon.

“What you see is what you be,â€ said Ross. “If our kids don’t see nothing but people out there selling dope…we want to transition that.â€

Race, equity, and politics were front and center at this year’s SXSW. There were sessions about the problems of inherent bias and artificial intelligence. A section of the SXSW Trade Show was dedicated to social causes with groups including the ACLU in booths on the show floor. There were even signs in the restrooms opposing Texas’ SB6 legislation, the so-called “bathroom bill,â€ which requires transgendered people to use the restroom corresponding to the gender on their birth certificate.