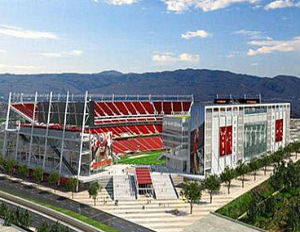 A rendering of Levi's Stadium.

Members of the media were led by stadium project executive Jack Hill and 49ers’ officials, several outlets reported. They watched as gravel was piled onto the stadium’s floor. Eventually, grass will be transported up from a Livingston, CA, farm. It’s just outside of Turlock, which the San Fransisco Chronicle reports is a one-time hometown of 49ers quarterback Colin Kaepernick.

Media toured the expansive and not nearly completed locker room. Media members also got a view or their future work room, and the glass-encased press box.

The seating is much closer to the field than Candlestick Park, and the place has an airy feel with broad concourses and wide stairways.

Media also had the chance to look down upon the 20,000 foot 49ers museum, which will have rotating exhibits and a large educational element. The museum will be open seven days a week and will host school groups where students will learn about football history and player physiology.

The stadium is scheduled to open Aug. 2 with a soccer game between the hated Seattle Sounders and the San Jose Earthquakes. A 49ers preseason game will likely follow shortly after that.

Take a look at the brand new digs in a video posted by the team: