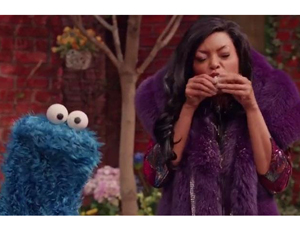 Empire star Taraji P. Henson is keeping busy until season two of her record-breaking series. Shortly after we spoke with the actress at the Summer Sizzle BVI Launch Party, she hostedÂ Saturday Night Live. Henson opened up the show with an original gospel-influenced number, “I Made It,” singing off a humorous list of all the other less than ideal jobs she could have been doing had she she not arrived as a Hollywood big shot.

Later in the night, the American Black Film Festival ambassador transformed into Empire’s Cookie LyonÂ and took a stroll down Sesame Street. Cookie didn’t soften things up for the world famous muppets, either. She convinced Bert that his longtime buddy Ernie was trying to “play him,” and she refused Cookie Monster’s offer to share a chocolate chip treat before snatching it and devouring it all by herself.

Other SNL moments with the star included a Nicki Minaj impersonation, a QVC skit and a mom-daughter moment where she attempted to teach her vlogging teen how to “dance like a woman.”

Henson also confirmed the release of her memoir, yet to be titled. It is reported that the book will debut mid-2016 and unveil details about her childhood in a “rough Washington, DC neighborhood, being a single parent and her film and TV roles.” The actress posted a screenshot of the announcement to her Instagram with the caption, “As promised!”