TaylorMade 'Speed Police' to Golfers: Get Rid of Your Old Clubs 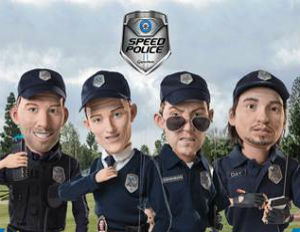 “Speed Policeâ€, a new advertising campaign by TaylorMade Golf Company, casts a side-eyeing glance at golfers who are playing with outdated equipment. The commercial, by the Los Angeles-based firm Zambezi, is the latest in an industry trend which encourages players to move on, but the jury is out on whether thrifty consumers are amused at the lighthearted — and not-so-subtle — messaging.

“The Speed Police campaign reminds consumers that golf is fun, and hitting the ball a mile with JetSpeed metalwoods makes it even more fun,â€ TaylorMade said in a release.

“Golfers have heard every tech claim and distance-enhancing pitch in the book. Our goal was to bring some ‘fun’ and energy back to golf with a campaign that delivers a compelling product message and makes you stop and say ‘what just happened,’â€ said Bob Maggiore, CMO atTaylorMade Golf. “The use of these marionettes is a departure from traditional golf advertising and chances are you’re going to remember what they have to say about faster metalwoods.â€

But some consumers are already bristling at the notion of a brand alienating penny-pinching consumers in an already expensive sport in the name of “disruption.”

“Every major stick and ball sport is given license to push their storytelling to the brink of insanity, but people never expect the same kind of disruption from a golf brand’s advertising,â€ Buth said. “In a sport that desperately needs fresh air, TaylorMade definitely isn’t afraid to push the status quo.â€

Tomorrow, slow, outdated clubs go on official notice. The @TMSpeedPolice are coming. You have been warned. #DistanceIsTheLaw

TaylorMade launches ad campaign designed to get golfers to get latest & greatest. Theme in industry is encouraging turnover.

And folks quickly chimed in:

@darrenrovell Bring down prices, average golfer won’t spend the same amount every two years on a driver that they spend on a phone.

@darrenrovell sounds like a project I worked on with contact lens client. Making product to last vs. need for consumer to re-up = tough

@darrenrovell Hopefully it involves some price reductions. Golf equipment is too damn expensive.

Here’s the first (of many more to come?) thirty-second spot. Golfers: Are you moved? Let us know in the comments.