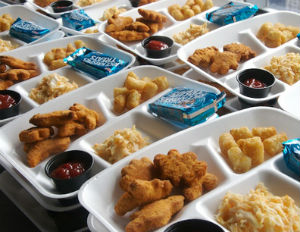 The chaos in Ferguson, Missouri, has pushed the start date for the district’s public schools from Aug. 14 to Monday, Aug. 25, leaving many reduced-priced or free lunch students and their families struggling to make ends meet.

But amidst of the uproar and crazy video footage surfacing out of Ferguson, comes some good news for local residents, as one North Carolina teacher has raised more than $100,000 to help feed the local students.

“When I found out school had been canceled for several days as a result of civil unrest, I immediately became worried for the students in households with food instability,” says public school teacher Julianna Mendelsohn, who started the campaign.

Ferguson is a school district where 68% of its students rely on free or reduced lunch, so a campaign such as Mendelsohn’s is definitely right on time. All donations from the fund will go directly to the St. Louis Area Foodbank in hope that assistance will be provided for every student in need of food.

To learn more about the campaign and find out how you can help feed the children of Ferguson, visit the campaign’s website here.