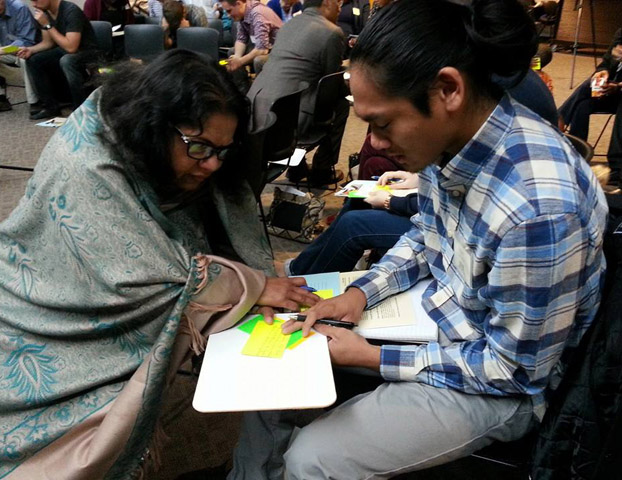 As a brand-new teacher, Marilyn Rhames faced a class of third graders for the first time and felt inadequate to tackle the task before her. Many of her charges lived in the nearby neglected, dilapidated Ida B. Wells housing project for low-income earners. “The low-rise row houses were very run-down. They looked as if no one could be living in them, but the children in my class lived there.â€

Most of those homes have since been destroyed. In their place, “Six-hundred-thousand-dollar brick homes are now being erected in the same area,â€ Rhames says.

But in 2004, when Rhames embarked on the teaching career in Chicago she’d felt led to pursue after working as a journalist in New York, the pall of urban blight hung over the area. “I looked in the eyes of my students and realized they had a life that was severely challenged. I knew I needed God to help me teach them.â€

Such were the quiet beginnings of Teachers Who Pray, now a nonprofit and 501 (c) (3) organization that encourages educators to pray for the needs of public schools and public schoolteachers across the nation.

Rhames’s class was entirely African American–about half her students hailed from the projects; the other half lived in Lake Meadows, a nearby middle-income apartment complex.

“Some of my students were two levels above grade level, others were two levels below,â€ Rhames says. “I felt stretched beyond my limits. I am a believer in the power of God and the power of prayer. I felt that I definitely needed to tap into the spiritual realm in order to do my job because the task before me felt impossible.â€

The new teacher received no training or support from the school administrative staff or principal, though Rhames admits that she didn’t ask for it. “The school had its own problems. The administrators weren’t doing what they were supposed to be doing for the kids–that was also part of the struggle.â€

Rhames would remain at the poorly run school for two years, during which time she would meet with one or two other Christian teachers for the purpose of praying for the needs of the school.

When Rhames moved on to teach at a promising turnaround school in Englewood, one of Chicago’s most distressed and violent neighborhoods, the need for prayer–despite the school’s full-scale physical renovation, new books, and new staff–was apparent. Rhames invited more staff members to pray with her.

The goal of Teachers Who Pray.
By 2012, Teachers Who Pray had become a 501(c)3 with the goal of galvanizing an entire nation of teachers who believe in the power of prayer to effect change in the nation’s public schools, accomplished chiefly by weekly prayer meetings teachers are legally allowed to hold on school property before or after school.