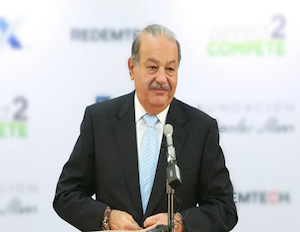 Telmex CEO Carlos Slim, better known as the world’s second-richest man, recently told an audience that we should institute a three-day workweek.

At a business conference, the telecom giant explained his radical overhaul, saying, “With three work days a week, we would have more time to relax; for quality of life. Having four days [off] would be very important to generate new entertainment activities and other ways of being occupied.”

Before you all celebrate and start planning those lengthy vacations, the tradeoffs would be longer work hours. Slim suggested that employees would clock in as many as 11 hours a day— and work until they’re about 70 or 75. His decision to push back the retirement age stems from his desire to make labor force more productive while also making it healthier.

The Telmex CEO has already begun to test out his theories inside his own corporate culture. Workers are eligible to retire at age 50, but Slim has offered a voluntary plan where employees can continue to work after that but only for four days a week. Others have similarly experimented with reducing work hours, such as the city of Gothenburg, Sweden’s second largest locale. They have implemented six-hour workdays at the same pay for a group of municipal workers.

Here in America, companies such as Treehouse enacted a four-day workweek while paying its employees the same as it would for a five-day week. The founders have noted that the work is of a higher quality, that employees are more motivated, and the company is able to recruit talent while sales have remained strong.

What do you think about Carlos Slims’ decision to create three-day workweeks? Speak on it below.