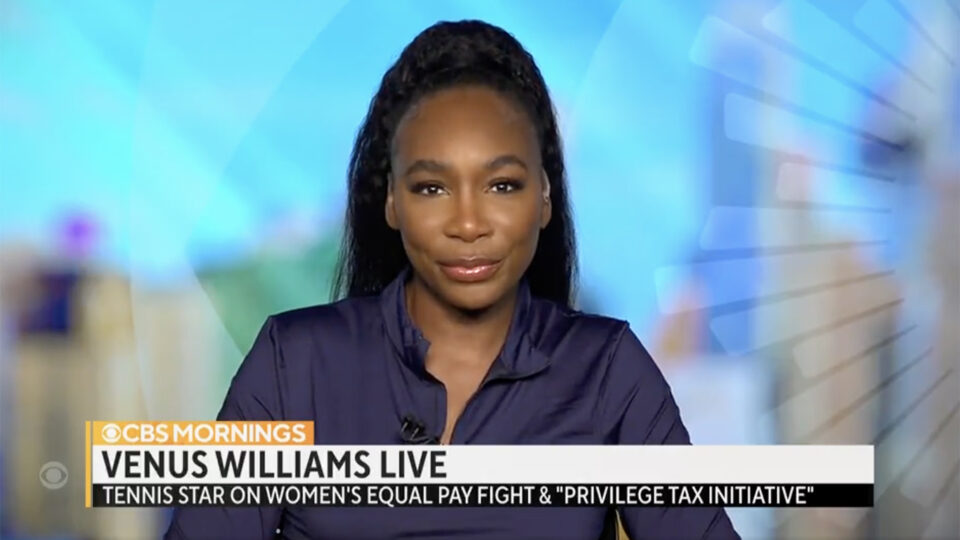 Before Women’s History Month comes to an end, tennis superstar Venus Williams is sounding off on equal pay.

“It’s important to call attention to this,” she shared on CBS Mornings with Gayle King last Wednesday. “That people know this, because women not only need equal opportunity, but it gives them opportunity to grow and become strong and to help their families.”

The seven-time Grand Slam champion revealed her Privilege Tax initiative to bring attention to the gender pay gap that she has been working to close throughout her career.

According to the U.S. Department of Labor, white women make $0.82 on the dollar as men, while Black and Latino women make significantly less, at $0.64 and $0.57, respectively.

“I came into inequality at the young age of 16 when I played my first Grand Slam and that’s a rude awakening, so I don’t want any other young women to have to face that,” said the 41-year-old athlete.

“It gave me goosebumps how close he got to my father,” @Venuseswilliams says of Will Smith’s Oscar-nominated performance in “King Richard,” adding that she will be rooting for him Sunday night. pic.twitter.com/gFbkHiVbzu

Her Privilege Tax initiative aims to raise money where 100% of proceeds will go to Girls, Inc., a nonprofit dedicated to advocating and empowering girls and young women. Customers of participating companies partnered with the initiative will be able to donate $1 to close the wage gap, including Williams’ very own EleVen clothing brand.

“That gap widens when you’re a Black woman, a woman of minority,” she said. “I’m just very happy that as an African American woman that I can speak to this and make this known. It’s a very important role that I never thought I’d play. I just wanted to win Wimbledon! I got there, it wasn’t equal, and it’s just led me to this place where I’m able to do more than I ever could have thought I could do.”

The tennis champion won her first Grand Slam in 1998 and went on to make history in 2006, when she became the first woman to earn the same prize money at Wimbledon as Roger Federer, the men’s champion. Williams praised all the work put forth to close the gap since then, including the USA Women’s Soccer Team having just won an equal pay lawsuit against the U.S. Soccer Federation last month, however a great deal remains to be done.

She calls to action for more organizations to join her cause.

“People do want to do this, but it takes time,” noted the tennis legend. “It doesn’t happen overnight.”