Tap the resources of a powerful board 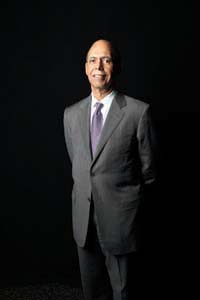 Michael Lomax, CEO of the UNCF and member of the NMAAHC Advisory Council (Photo by Lonnie C. Major)

In June 2005, Bunch had to contend with an intimidating meeting at NMAAHC, a month before he officially took the helm. “I walk into my first board meeting. I’m looking for my name, and I am between Oprah Winfrey and Dick Parsons,’â€ he reflects.

Bunch knew that this advisory council–co-chaired by Parsons and Linda Johnson Rice, chairman of Johnson Publishing Co., publisher of Ebony and Jet magazines–was composed of some of the nation’s most powerful people who have vast strategic knowledge and virtually unlimited resources, enviable global contacts and, most important, a burning desire to erect a monument to black achievement. Sixteen of the 24-member advisory council are African American, many of whom are among the NMAAHC’s largest contributors: Parsons, Bob Johnson, former Fannie Mae CEO Franklin Raines, Johnson Publishing, and the Oprah Winfrey Foundation have all contributed $1 million or more.

Chenault’s American Express has given $5 million, and other African American council members Anthony Welters, executive vice president of UnitedHealth Group, and Allan Golston, president of U.S. Programs for the Bill & Melinda Gates Foundation, helped guide their organizations’ investments of $5 million and $10 million, respectively. “We have and will continue to use our collective and individual resources to gain major corporate contributions,â€ says Parsons.

Bunch says the council’s immeasurable value was giving the museum instant credibility. “You had to show that the major players cared about this, and because there would have to be so much private fundraising, which is more than we’ve traditionally done at the Smithsonian, the decision was to make sure the board had a strong corporate leadership,â€ says Bunch. “The most amazing thing is [I told] all those folks that I need them for the whole decade, and they stayed. Everybody realized how important this is.â€