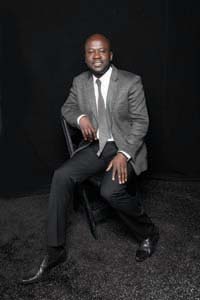 David Adjaye, British Ghanaian architect with an international portfolio slated to work on the NMAAHC (Photo by Lonnie C. Major)

The advisory council weighs in on every strategic decision involving the museum’s development and management. The NMAAHC’s leash was shorter than that of most nonprofits because the museum operates under government oversight as part of the Smithsonian complex. The team had a playbook, a set of principles and policies that had been developed by the founding presidential commission. It was up to Bunch to call the plays, though. “I learned you’ve got to have confidence in your vision, but be smart enough to let other people help shape it,â€ he says.

So it was important for Bunch to utilize its members’ expertise for a range of initiatives and challenges. For instance, he routinely consults with Raines and Johnson on how to tackle congressional issues. He’s tapped Ann Fudge, former chairman and CEO of Y&R Advertising, to help map out a plan to increase visibility. He’s discussed educational issues with UNCF CEO Michael Lomax. And to design and upgrade the virtual museum, he accessed critical human and technical resources through IBM Chairman Samuel J. Palmisano. Bunch says the board “provided strategic support, but they were also an umbrella. They allowed me to focus on what I needed to focus.â€

Become a Super Salesman
One of Bunch’s strengths is his ability to sell the mission, whether conferring with congressmen on the Hill, talking to CEOs in the executive suite, or chatting up a group of senior citizens at a community center. Delphia Duckens, associate director of external affairs for NMAAHC, who has coordinated fundraising efforts for the past 15 months, asserts that “Lonnie is one of the best in terms of articulating the vision in a way that people see themselves wanting to be a part of it. In this business we say you’ve got to make them cry three times. Very few CEOs or directors I’ve worked with can connect with people on the emotional level, and that’s what makes people write checks.â€ Lilly Endowment Inc. has contributed $10 million, and the Houston Endowment donated $500,000. Part of the reason for such success has been Bunch’s ability to forge local partnerships with museums and historical societies. He also makes a convincing case for broad geographic representation.