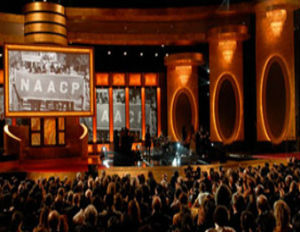 TV One executive producers Reginald Hudlin and Phil Gurin announced the names of presenters for the 46th NAACP Image Awards, which airs at 9 p.m. EST tonight on the network. The award show is slated to feature celebrities including Will Smith, Russell Simons, John Gaskins III, Kerry Washington, Oprah Winfrey, Gabrielle Union, Tracee Ellis Ross, along with many more speakers, guest appearances, and cast members from hit shows such as Orange is the New Black, House of Cards, Grey’s Anatomy, and How to Get Away with Murder.

[Related: Will Smith to Join Margot Robbie and Jared Leto in ‘Suicide Squad’]

Anthony Anderson is set to host the live two-hour special, and the pre-show is being hosted by Kevin Frazier and Shaun Robinson, live from the red carpet at 8:00 p.m. EST. The NAACP “Entertainer of the Yearâ€, which is awarded to an individual in the entertainment industry who has achieved success across multiple platforms and projects, will also be disclosed tonight. Spike Lee will receive the “President’s Awardâ€ and US Attorney General Eric Holder, Jr. will receive the “Chairman’s Award.â€

The NAACP Image Awards focuses on people of color who have major accomplishments in television, music, literature and film industries, along with the individual promoting social justice through his or her ventures. Winners were voted by the organization’s members and will be announced live when envelopes are opened.