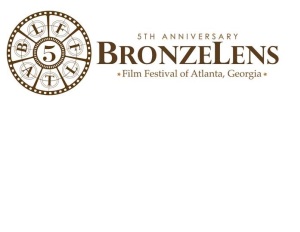 A world-class array of BronzeLens expert panels, workshops, domestic and international film screenings, and signature events that reflect Atlanta’s unique position as the Film Capital of the South will be on hand.

Selected juried films represent the work of filmmakers from the United States, Africa, the Caribbean, and South America. More than 40 films will be screened including a collection of shorts, features, webisodes, and documentaries.

BronzeLens Film Festival kicks off Wednesday, Oct. 22, with the screening of Through A Lens Darkly: Black Photographers and Emergence of A People followed by a Talkback with the film’s director, Thomas Allen Harris, at SCADshow Atlanta. Afterwards, Moguldom Entertainment will present a special screening of Bleaching Black Culture, the first public exhibition of this new documentary feature.

Returning sponsor BET Networks presents All Shorts | All Day, to screen the 15 official 2014 BronzeLens short film selections at the Georgia-Pacific Auditorium. BET Networks will also present a $5,000 prize to the winner of the BEST SHORT at the BronzeLens Awards the following day.

Some of the industry’s most accomplished headliners have committed to share their insights during BronzeLens 2014.Â Jimmy L. White, former writer on The Late Late Show with Craig Ferguson, known for the screenplay Ray, will lead a discussion about Writing Biopics.

Malcolm D. Lee and Bille Woodruff will be featured during Roger Bobb’s Directors Roundtable. Bobb, CEO of Bobbcat Studios, will hold a freewheeling discussion with a few of today’s hottest directors. He will be joined by Lee (The Best Man Holiday, The Best Man, and Undercover Brother) and Woodruff (Drumline 2: A New Beat, Addicted, Beauty Shop).

A favorite signature event for industry insiders, corporations, and the local community is the BronzeLens Women Superstars Luncheon, which will anchor the Friday events at the Atlanta Marriott Marquis Hotel. Awards recognizing the accomplishments of women of color in the film and television industry will be presented to the 2014 honorees. Broadcast journalist Monica Pearson will host the event, which starts at noon. Attendees can walk the red carpet from 10:45 that morning. The life and career of late actress and activist Ruby Dee will be celebrated during the luncheon.

BronzeLens has developed new partnerships with the networks ASPiRE Television and UP TV. An ASPiRE — A Different Reality panel will discuss how projects can connect with audiences and stand out in a popular marketplace; and how the films, shorts, and documentaries of directors, producers, and artists have the opportunity to be part of the network. ASPiRE’sÂ Tina Thompson, director of programming; Ryan Richmond, producer; and Valencia Joseph, marketing director, will present.

UP TV, which creates and produces entertaining and inspiring content that resonates with viewers, will host The Formula for Inspiring Content. The elements essential to creating and launching successful productions that entertain, engage, and connect with audiences that also inspire and uplift will be discussed. Panelists are Brad Siegel, vice chairman of UP TV; Jasmine Guy, star of an UP original movie, My Other Mother; Gregalan Williams, star of another UP original movie,Â Marry Me For Christmas and the upcoming sequel,Â Marry Us for Christmas; Eric Tomosunas, president and head of production, Swirl Entertainment Group; Cas Sigers-Beedles, screenwriter and producer, Nina Holiday Entertainment; Rhonda Freeman-Baraka, screenwriter and producer; Ryan Richmond, director of an UP original movie,Â Lyfe’s Journey, and executive in charge of original production at ASPiRE. Jaquitta Williams will moderate.

HBO Documentaries will host the Friday night film Mr. Dynamite: The Rise of James Brown, a new documentary about the Godfather of Soul. Through never-before-heard personal stories and explosive concert footage, this feature charts the phenomenal rise and lasting influence of soul singer James Brown. Immediately following,Â Rain Pryor, daughter of comedian Richard Pryor and star of the filmÂ That Daughter’s Crazy, will be present for the eagerly awaited screening. Both films will be screened at the Woodruff Arts Center Rich Auditorium.

BronzeLens will offer the Master Class, A CONVERSATIONÂ with Robi Reed. Emmy Award-winning casting director Robi Reed (The Best Man, Malcolm X, The Antwone Fisher Story, Love Jones, Set It Off) and now BET Networks vice president of Talent and CastingÂ will speak candidly with actor HOSEA CHANCHEZ from the hit TV show THE GAME onÂ the process of selecting talent to fulfill a director’s artistic vision. Actors and film enthusiasts will benefit from Reed’s insights onÂ the art and business of performing for the big and small screen. They will also enjoy a spirited question and answer session as she shares her personal journey and experiences with some of urban cinema’s most memorable film projects.

Legendary casting director and producer Reuben Cannon returns to BronzeLens to lead the Producers Roundtable. At this groundbreaking session sponsored by BET Networks, Cannon brings together high-level entertainment executives to share their strategies for producing and marketing successful film and television projects.

College interested in film and television will be able to attend the BronzeLens Student Track for a day of workshops designed to help them prepare for their big break. This fast-paced daylong session includes insights from young professionals on how they got their break, from studios about their internship programs, plus sessions on an array of industry jobs, and the screening of BronzeLens Official Student selections to vote on the Student Audience Award. Lunch will be served. ASPiRE Television will present the ASPiRE Student Award at the BronzeLens Awards.Â Â  Also Hammonds House Museum Family Film Festival for children age 5 to 12 will present an event that includes shorts based on the Coretta Scott King Book Awards and programmed activities.

Digital Diaspora Family Reunion in conjunction with Through a Lens Darkly will offer attendees the opportunity to share their stories and family photos on cellphones or as actual photographs. The innovative transmedia companion to Through a Lens Darkly, Digital Diaspora Family Reunion has reimagined the social network by inviting audiences to upload and share their own family photos, thereby building a “One World, One Familyâ€ album to take place at the Westside Cultural Arts Center. The film and transmedia project are co-sponsored by Atlanta Celebrates Photography, Sistography, and SCAD.

International films will be featured at BronzeLens in collaboration with France Atlanta 2014, Institut Francais, Art Mattan Productions, and Africa Atlanta 2014 presents the Atlanta debut of Under the Starry Sky (Des Etoiles), directed by Dyana Gaye. This motion picture received worldwide critical acclaim after its debut at the 2013 Toronto International Film Festival. Immediately after the film, Gaye will be interviewed by Shadow and Act’s Film and Culture Critic Zeba Blay.

Slated to emcee the BronzeLens Awards Show is actor, singer, entertainer and star of Tyler Perry’s Love Thy Neighbor television show, Palmer Williams Jr. The Best of FestivalÂ filmmakers in their respective categories and other noteworthy industry leaders will be honored at the Atlanta Marriott Marquis. Categories include the best in Features, Documentaries, International Films, Shorts, Student Films, and Web Series, as well as Best Actress and Best Actor. The red carpet opens at 7:00 p.m.

Cinema and Social Justice Sunday will be produced in conjunction with Center for Civil and Human Rights and continues to be a unique and critical component of the festival.Â  There will be a special presentation of Life’s Essentials with Ruby Dee, a documentary style film about love, art, and activism that tells the story of one of the most enduring couples of our times, Ossie Davis and Ruby Dee. In this open-letter style documentary, the rich lives of Dee and Davis guide their grandson Muta Ali Muhamad on his personal quest to master lasting love, conscious art, and undying activism.

About the BronzeLens Film Festival

Founded in 2009, The BronzeLens Film Festival of Atlanta is a nonprofit organization dedicated to bringing national and worldwide attention to Atlanta as a center for film and film production for people of color. Its mission is twofold: to promote Atlanta as the new film Mecca for people of color; and to showcase films and provide networking opportunities that will develop the next generation of filmmakers. Since its inception the BronzeLens Film Festival has evolved as one of the most comprehensive film festivals for filmmakers of color in the United States. Visit www.bronzelensf.com for more information regarding the BronzeLens Film Festival and for registration information.

For more information regarding the BronzeLens Film Festival visit www.bronzelens.com.