The All-Important ESEA (No Child Left Behind) Reauthorization 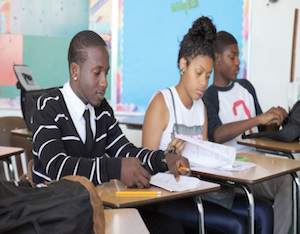 In the great trade debate last month, the air was filled with promises to help American workers keep pace with a changing world. Days after, the Senate Appropriations Committee approved new Republican cuts from funding for adult education and worker training – programs the GOP had embraced just a year ago.

When the Senate returns Tuesday from its July Fourth recess, the same movie will be showing, only this time affecting public schools around the nation. With considerable pride, Republicans are prepared to bring up a long-delayed rewrite of the Elementary and Secondary Education Act. But here, too, the GOP’s appropriations plan cuts from the very same programs it says it wants to increase.

At one level, this is simple arithmetic. The strict spending caps under the Budget Control Act leave no room for growth in 2016. Education and worker training funds are being sacrificed to make room for other GOP priorities, whether to fill holes in the transportation budget or to make a splash with a big increase for biomedical research.

But the numbers also illustrate a larger conflict faced by centrist Republicans. Going into the 2016 elections, these are often veteran lawmakers who see a golden opportunity to move past divisive social issues and focus on economic development and national security priorities. But time and again, the GOP keeps contradicting itself by failing to come to grips with the need for a budget deal to facilitate the investments it wants to make.