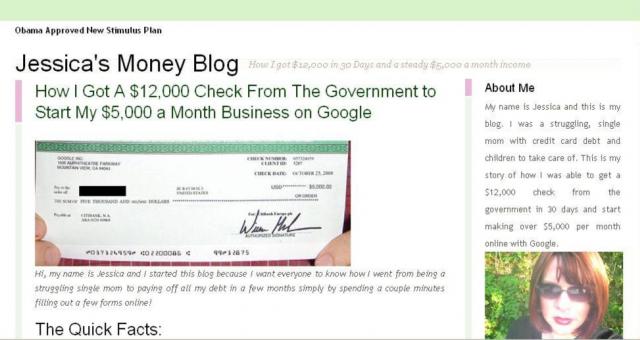 Since Obama signed the bill into law, sites such as OfficialStimulusPayments.com have been cropping up across the Web promising to expedite your stimulus check from the government.

But, there is no money being given out to individual taxpayers as part of Obama’s package. Instead, these companies are preying on unknowing and desperate individuals bilking them out of as little as $2 and as much as $1,000.

The Federal Trade Commission warned consumers last week that the promise of stimulus money in return for a fee or financial information is always a scam.

Shorty after Obama signed the plan last month, a crop of sites claiming to help consumer access their slice of the pie, sprouted up.

Unlike Bush’s economic stimulus which distributed $300 to $1,200 rebate checks to individuals and families in 2008, the American Recovery and Reinvestment Act will only funnel funds to state governments. Each state can apply for grant money to rebuild or strengthen its infrastructure. There are also a series of tax cuts for 95% of Americans. But for anyone not closely following Obama’s plan, it’s easy to assume the government will be cutting more checks for Americans.

Here’s how it works: An e-mail, online ad, or Website says you’re eligible to get an economic stimulus payment. You’ll either have to mail back a form or submit one online with your address, phone number, and sometimes credit card information. The message might appear to come from a rebate company or look like it’s straight from the Internal Revenue Service (IRS), the FTC says.

Other scams tell consumers that “their grantâ€ is available for a small payment by credit card. But here’s the real gotcha! Hidden way down in the fine print of the agreement is your enrollment in a paid program. Consumers can expect to see several hundred or even $1,000 worth of charges on their credit cards. Yikes, talk about a de-stimulus plan.

In an investigation done by PC World, Financial Crisis Grant, one of the suspect companies, billed customers a monthly membership fee of $79.95, indefinitely. Here’s what the Better Business Bureau had to say about companies like Financial Crisis Grant: “In our experience, companies placing government grant ads have no affiliation with the government, but rather, are third parties offering information that can often be obtained for free from government agencies.”

One of the sites I came across, OfficialsStimulusPayments.com, directs users to “Jessica’s Money Blog,â€ and the first post reads, “How I got a $12,000 Check from the Government to Start My $5,000 a Month Business on Google.â€Â  To receive the money, users must send in $1.99 for a “Free Grant Kitâ€

Biden on the Record: ONDCP