The Economics of Riots: Causes and Solutions 23 Years After Los Angeles 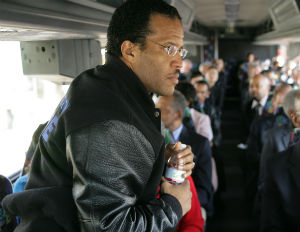 Participants who were planning to attend the American Heart Association’s Quality of Outcomes and Research conference in Baltimore, Md. this weekend have been told to make other plans.

The association recently cancelled the event telling would-be attendees, “After speaking with local authorities, hotel management and the Convention and Visitors Bureau we have decided to cancel the 2015 QCOR conference due to the potential for violence.â€

The cancellation is the tip of the iceberg for a city that sits on a powder keg of emotion and unrest in the wake of the death of 25-year-old Freddie Gray, who died after being injured in police custody.Â Â  Initial protests were largely peaceful, but Monday night the situation took a turn for the worse when teenagers and police clashed at Mondawmin Mall.

In an ironic twist, Â the unrest in Baltimore comes practically 23 years to the day after Los Angeles erupted in violence in response to the acquittal of four white Los Angeles Police Department officers in the beating of black motorist Rodney King.

According to analysis by the National Bureau of Economic Research, the Los Angeles riots in 1992 resulted in $446 million dollars in property damage alone. That does not take into account the costs of rebuilding residences and businesses and the opportunity costs associated with closing businesses, community centers, and schools.

The images from Baltimore are striking at the very heart of racial tension for many Americans.Â  They strike a particular vein, however, for John Hope Bryant.

Bryant not only lived in South Central, Los Angeles, but he was also moved to go onto create one of the biggest nonprofits dedicated to financial literacy and economic Â empowerment Â in the world in response to the riots.

Black Enterprise spoke to the chairman and CEO of Operation HOPE about the ways in which an already challenged Baltimore — with high unemployment rates and low homeownership levels for African Americans — can regain its financial footing.

BE:Â  You were on the ground during and after the LA riots and played a role in the rebuilding process. As you see the situation in Baltimore unfold, what parallels come to mind?

Bryant: They broke both my heart.Â  I don’t know what to make of the fact that this unrest in Baltimore comes 23 years after LA.Â  Similarities between Baltimore, LA, Ferguson, and all of the riots are that the conversation is about the symptoms and we’re not talking about the trigger point.Â Â  The causes go back 150 years.Â Â  150 years ago last month President Lincoln created a Freedman’s Bank chartered to teach freed slaves about money.Â  He was killed 5 weeks later.Â  Half of the 73,000 depositors lost everything because of corruption after Lincoln’s death.Â Â  That led us to stop trusting government and financial institutions.Â  That lack of trust lives on.Â Â Â  No one took up the issue of economic rights until Rev. Dr. King and former UN Ambassador Andrew Young.Â  Dr King was killed before the first march of his Poor People’s campaign, aimed at providing economic empowerment to Blacks.Â  It’s not that we don’t understand the memo, it’s that no one ever gave us the memo about free enterprise and capitalism.

BE:Â  You like many researchers, point to the fact that economic distress is at the heart of much social distress. Why haven’t Blacks been more proactive about creating economic security in their communities.

Bryant: African Americans in the United States, and Africans on the African continent, are the only races of people that created a political power base before an economic one.Â  This alone, explains so much.Â  We have been focused on issues of equality and social injustice.Â  It’s just the way history played out. Â After 200 years of slavery, and a hundred years of Jim Crow, depression and a loss of hope have become pervasive.Â  It’s to be expected. Â Â Half of poverty is low self-esteem. Â In addition, mainstream America has checked out. Today, the number one issue with racism is indifference, not hate.

BE:Â  Where should people and communities begin, when it comes to rebuilding after riots?

Bryant: We need to get back to basics. That starts with family and community.Â  A government solution has not solved anything in a hundred years.Â  It just keeps bad things from getting worse.Â  There are tremendous opportunities for entrepreneurship.Â  If people won’t give us jobs, we have to create them.Â  Community initiatives like Operation HOPE’s 5117 program which focuses on financial literacy, role modeling, internships and banking the unbanked will play a pivotal role. People need to look within themselves and to their communities.Â  They must remember that you can only have a rainbow after a storm.