Do You Agree With Women Contributing to Buying Engagement Ring? 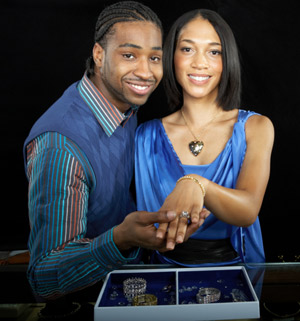 He put a ring on it, but for how long? (Image: Thinkstock)

Within the past week an interesting topic resurfaced about engagement rings, and whether it’s acceptable for women to contribute toward the purchase of one. Excuse me for a moment while I try to comprehend the rationale behind this idea. On the surface, it doesn’t quite make sense. Traditionally, men purchase engagement rings with the intent of presenting it while asking for the woman’s hand in marriage. An engagement ring is a symbol indicating a woman is engaged to be married based on the man’s proposal. Why would a woman contribute toward the purchase of an engagement ring meant to be an expression of love and desire for covenant from her beau?

Call me old-fashioned, but the idea of having a woman contribute toward the purchase of her engagement ring is an absolute deal breaker. I am fully aware of the interest in engagement rings and how people are drawn to the various sizes, styles, and cuts. But let us not forget that an engagement ring provides no direct correlation to the actual success of the marriage itself. As a matter of fact, if there is too much focus placed on the engagement ring and not the relationship, the marriage is destined for failure. I pose this question to you, “Is an engagement ring a gift from the heart or jewel for the ego?â€

The average cost of an engagement ring is $5,200, according to the XO Group Inc. 2011 Engagement Engagement & Jewelry Survey. Also, about 12% of couples spent more than $8,000 for an engagement ring, according to the survey. The amount spent for an engagement ring is generally based on a man’s salary, and his ability to save up for the sentimental purchase. In my circle of friends and associates, the guys understand the importance of the ring purchase and realize the ring is a direct reflection of who they are. As a result, they usually perform their due diligence and ask for assistance from female friends prior to making the purchase. However, what about a man who may not have the ability to purchase an expensive ring? Should he delay moving forward with plans of marriage simply because he cannot afford an expensive ring?

I look back to the various mentors I have in my life who have been married for more than 40 years. I don’t ever recall hearing them talk about the cost of the engagement ring being a factor in the success of their marriages.

Unfortunately, in today’s society, engagement rings are generally jewels used for show with friends. The problem with this shift is that it has the ability to take the focus away from the actual relationship needed to sustain the marriage. The engagement ring should be a gift from the heart of the man and not a jewel for the ego.

Ladies, would you be OK with marrying a gentleman who can only afford a $1,500 to $2,000 ring today? Or would you prefer to wait another two to three years so he can purchase the $8,000 ring?

Men, are you aware of the importance placed on the engagement ring? Do you allow it to impact how you approach marriage?

Kenny Pugh is a life & relationship strategist, author of ‘Can You Do It Standing Up? ,’ speaker, HLN contributor, sought-after speaker on finances, singleness, relationships and life. He is also the visionary behind KTP Financial, LLC (www.ktpfinancial.com). You can find more information about Kenny at www.kennypugh.com. Also, follow him on Facebook at www.kennypughfanpage.com, on Twitter @mrkennypugh and on YouTube at Kenny Pugh.