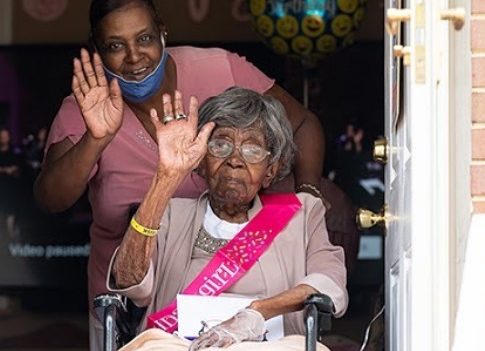 According to the Gerontology Research Group (GRG), Ford was born on August 15, 1905, but Ford was more than a number of long livers in a database. She was loved by family who knew various elements of Ford’s life story. On Facebook, Tya Monte-Powe, who identified  Ford as her great-grandmother, posted a message explaining that Ford not only represented the advancement for her family, but also of the Black African American race, and culture in our country.

Ford grew up working on a farm where she planted and picked cotton, plowed the field, and cut wood. Later, according to reports, she worked for more than 20 years as a nanny and was a longtime member of Macedonia Baptist Church.

“She was a reminder of how far we have come as people on this earth.  She has been celebrated all over the world by local governments, community leaders, social media, foreign dignities and Presidents as a cherished jewel of society for holding the honor of being the oldest living person in America,” Monte-Powe wrote.

According to WCNC in Charlotte, Ford died at 116 surrounded by her loved ones at home. It was pointed out that Ford’s age could have been 115 or 116, depending on the accuracy of Census records. Regardless, WCNC shared that Ford had 12 children, 48 grandchildren, 108 great-grandchildren, and approximately 120 great-great-grandchildren.

“It’s a sad day but it’s also a great day in heaven,” Ford’s great-granddaughter Tanisha Patterson-Powe said in the WCNC interview. “Although we’re saddened by it, we take great pride in the legacy that she does leave behind.”

Fortunately, Ford lived to receive recognition to celebrate her life.