The Origins of The Baltimore African American Festival 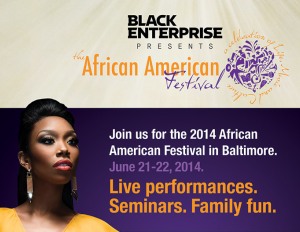 The African American Festival is taking place the weekend of June 21 & 22, 2014 at M&T Bank Stadium, 1101 Russell Street in Baltimore, Maryland. Black Enterprise is partnering with AAF for the 2014 Festival, which promises to have great entertainment throughout the weekend for all to enjoy!

‘The African American Festival officially started in 1976 as AFRAM – part of Baltimore City’s Showcase of Nations. Â Every ethnic group hosts an event to help celebrate the City’s diversity. But the model and essence of AFRAM was originally created when the Soul Festival which was started in 1970. The festival was started to celebrate African American food, music arts & crafts.’ says event producers Shelonda Stokes and Davis Grei along with co-producer Sharon Page who has successfully produced the event and look forward to bringing people a better experience this year.

Last year, over 350,000 attendees passed through the festival over the July 4 weekend and AAF is proud to be named the largest African American Festival on the East Coast.

‘The African American Festival has expanded to also include a focus on Health & Wellness, Financial Literacy, and education in numbers areas (Beauty, STEM, Business, Sports, etc.). Our tagline is A Celebration of Life, Music and Culture. Â This year, the festival’s theme is “Happyâ€,’ Shelonda Stokes adds.