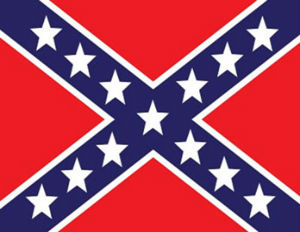 2015 has the makings of a historically tumultuous year for race relations in the United States of America. As the nation continues to reel from the stories and images of black bodies left lifeless in the street by vigilantes and police alike, the conversation has shifted from how far we’ve come as a nation, to how much more we can take and a nation divided. The latest act of merciless violence on American soil is the slaughter of nine black bodies at the Emanuel African Methodist Episcopal Church in South Carolina – one of the oldest and most historic black churches in the country – at the hands of a white gunman. Beyond the universal condemnation of the shooter and his actions, the American people have responded by taking a long hard look at one of the most significant and divisive symbols in the country’s relatively short history.

The Confederate flag never had its heyday. Adopted by the Confederacy during the Civil War, the flag was the proud symbol for a soon to be defeated and outlawed institution. While the roots of the flag arguably lie in a somewhat perverted form of nationalism – as the initial seven states of the Confederacy succeeded from the United States and formed their own “nationâ€ built on their shared culture, beliefs, and values – when viewed in context of what the Confederacy fought for and hoped to achieve, the flag is viewed by many as little more than a lasting symbol of oppression and a brutal reminder of a civil war that claimed the lives of hundreds of thousands of Americans. The Civil War ended in 1865, and for a country with a history of bloodshed as rife as the United States, it’s enduring legacy is a testament to the power of emotion, nostalgia, and unfortunately, mis-education.

Since the shooting, investigations have recovered several images and documents confirmed to be of, or by, Â Dylan Roof, the man charged with the murder of nine people in a church last week in South Carolina. Roof’s fascination with the flag and it’s symbolism have sparked global debate about its place in modern American society; a society that has repeatedly espoused claims of equality, justice, fairness, racial progression, and even racial harmony. The debate rightly centers on the question of how any of those things can co-exist with a symbol like the Confederate flag waving proudly over citizens that have felt the repercussions of the history that the flag represents, and continue to face obstacles that are in no small way related to the symbol.