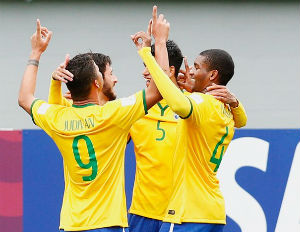 The weekend is never quite long enough and it seems as though there’s always too much to do. With so many things happening, who can keep up? Don’t sweat it, we’ve got you covered. Here’s what happened this past weekend–in case you missed it.

Continuing strongly throughout the weekend after bubbling up for weeks, headlines were dominated by the seeming implosion of international soccer (better known internationally as football) governing body FIFA. Following years of accusations of scandal and bribery, things came to a head this past week when the U.S. Department of Justice released their 161-page indictment of FIFA officials and executives, which was backed by an FBI investigation.

Richard Weber, the IRS head of criminal investigation, told the Wall Street Journal, “This really is the World Cup of fraud, and today we are issuing FIFA a red card.”

According to reports, the DOJ release indicts nine FIFA officials and five corporate executives with corruption charges, including racketeering, wire fraud and money laundering conspiracy. In the U.S., where soccer doesn’t command quite the fandom of national sports like [American] football and baseball, it’s ironic that all of the individuals named in the scandal are American. Just for emphasis–all nine current and former FIFA executives who got arrested are from the Americas, including CONCACAF president Jeffrey Webb.

CONCACAF, the Confederation of North, Central America and Caribbean Association Football, is the governing body responsible for North America, Central America and the Caribbean, as well as several countries in South America, including Â Guyana and Suriname and French Guiana. Detailing the scope of the investigation, a report from Business Insider examines the DOJ charges and notes that –

“The bribery and corruption charges, which the DOJ says involved more than $150 million over 21 years, are almost exclusively related to tournaments in North America (organized by CONCACAF) and South America (organized by CONMEBOL) that are second- and third-tier competitions in the grand scheme of things.We’re talking about bribery related to CONCACAF World Cup qualifiers, the CONCACAF Gold Cup, the CONCACAF Champions League, the Copa AmÃ©rica Centenario, the CONMEBOL Copa AmÃ©rica, the CONMEBOL Copa Libertadores, and the Copa do Brasil. The host selection for the 2010 World Cup and the 2011 FIFA presidential election are the only FIFA events mentioned that exist outside the Americas.â€

Per a report from the New York Times, as the world took notice of the confirmed claims against FIFA and outrage began to mount, the 14 culprits were promptly arrested in Zurich during an annual meeting by Swiss authorities. The corruption within FIFA was so ingrained and deeply rooted that, when speaking with a law official regarding the arrest, he responded to the Times “We’re struck by just how long this went on for and how it touched nearly every part of what FIFA did … It just seemed to permeate every element of the federation and was just their way of doing business. It seems like this corruption was institutionalized.â€

In the wake of the charges and arrests, many have noted the lack of action against long seated FIFA president Sepp Blatter. Blatter was named, for the fifth time, the winner of a controversial election on Friday, just the latest appointment in a career that spans roughly 40 years within the organization. He’s been FIFA president since 1998. As president, Blatter sits at the head of the multibillion-dollar organization that controls the world’s most popular sport and, according to the NY Times, is widely recognized as the most important person in sports.

A large part of FIFA’s success is its ability to tap into a global sports market, particularly in Asia, Africa and Latin America, where developing nations represent new consumers for brands. According to a recent report from the Wall Street Journal detailing the stressÂ  FIFA has put on its relationships with sponsors, it’s reach is rivaled only by the Olympics in terms of global marketing opportunities, and is generally considered to be more “advertiser friendly.” Illustrating the massive sums of money that FIFA collects, the report states that –

“FIFA collected $1.6 billion in sponsorship money in the four years leading up to the 2014 World Cup, nearly half of which came from its six top ‘partners,’ according to research firm IEG, a unit of ad giant WPP. Those figures don’t include the hundreds of millions of dollars the six companies–Coke, Adidas, Hyundai, Emirates, Visa, and Sony–spend to advertise on telecasts of soccer matches. Overall, FIFA took in $5.72 billion in the 2014 [World Cup] cycle.â€

There are many questions that remain following the answers obtained by the Department of Justice, however this latest round of controversy seems to be the most serious troubleÂ  FIFA has been in. As the trials begin, it’s likely that more secrets will come out. But for now, the story is that of a soap opera, as fans and global business partners alike wait to see how it unfolds.