There's an Obama in Your Classroom 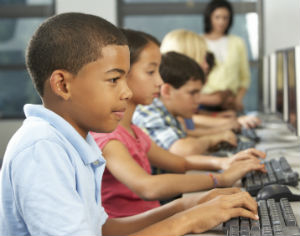 I came home from Bible study last night and turned on the TV. The President was onstage at the Democratic National Convention speaking with the conviction and intonation of a Baptist preacher on Sunday morning. When he mentioned Donald Trump, the crowd starting booing, and President Obama said, “Don’t boo, vote.â€ Vote for Hillary or vote against Trump–those were the only two choices he gave to his fawning crowd.

I couldn’t resist noticing how handsome President Barack Obama is. Years ago, when I was doing my student teaching in a fourth grade classroom at a school on the northwest side of Chicago, Obama walked three feet into my classroom to observe. He gave me a wide, bright smile. I blushed.

He panned the classroom and was gone in 60 seconds. When I told my mom later that evening that Barack Obama was in my classroom, she asked me, “What is that?â€

You see, Obama was a little known, Illinois state senator, who was running for the U.S. Senate at the time. To the uninformed eye, he was just your average Joe; people often needed his name repeated before they attempted to pronounce it.

Thirteen years later, my mother’s “whatâ€ has become the most powerful “whoâ€ in the world. As a teacher, this gives me chills, and then sets my soul ablaze.

Class rosters don’t tell teachers how to pronounce our students’ names, let alone point out which kids will succeed in life. When students arrive on the first day of school, we can’t look into their eyes or read their palms to predict who will grow up to become a famous writer, doctor, or lawyer and who will spend the rest of their lives bouncing from unemployment to low-paying job.

We also don’t know which students will become drug addicts, inmates, or lose their lives too soon. When I taught my third grade student,Â Christopher Fields,Â how to read and multiply, I had no idea that eight years later, this smart, kind, little chocolate gum drop with the most heartwarming smile and tender eyes would be lying in a casket, an innocent casualty of a gang related drive-by shooting on his block.Â

Teachers are Prophets of the Present

If we give our students the best education right now, then their past pains will matter less and their future failures won’t feel as bad. The work of a good teacher travels through time, healing as it goes. It seeks to protect all students with the armor of affirmation and the sword of knowledge.

There’s a woman at my church who is a retired wedding photographer.Â During testimony service on a recent Sunday morning, she said she had been rummaging through old photographs in her attic and noticed some familiar faces. Upon closer inspection, she realized that the young bride and groom in the box of discarded prints and negatives were none other than Barack and Michelle Obama.

Before the Obamas had wealth, fame, and political clout, they entrusted her to capture one of the most important moments of their lives. The photographer wept in a mix of awe and humility as she spoke.

Teachers are much like wedding photographers–although our snapshots last a year rather than a day. Amid the sea of hundreds, even thousands, of young people we have taught, there are, most assuredly, little Michelles and little Baracks who are destined for greatness, and they need every second of the now we have to offer.

Then there are the little Marilyns–shy introverts whose dreams of changing the world through the inaudible voice of her pen could easily go unnoticed.

We also have little Christophers who come from good, strong families and who we all assume will go to college, get married, and live out successful lives. Tragically, they sometimes don’t get that chance.

Sometimes we allow the rebels, the kids who are disrespectful and who don’t do their work, to define our teaching experience. Their anger or indifference is usually rooted in a pain they’d rather protect than expose.

I am committed to this lofty pursuit: bringing forth education equity by teaching every child as if they are going to be POTUS in 30 or 40 years. The system I dream of would not tolerate haves and have-nots, five-year-old winners and losers. No, I dream of a day when the going assumption is that every child is a future president of something noble and great.

This post was written by Marilyn Rhames and originally appeared atÂ EducationPost.org. It is republishedÂ here with permission.

Marilyn RhamesÂ has taught in district and charter schools in Chicago for the past 11 years, and currently serves as alumni support manager at a K-8 charter school. She is a 2016Â Surge Institute FellowÂ and the founder of the Christian nonprofitÂ Teachers Who Pray.