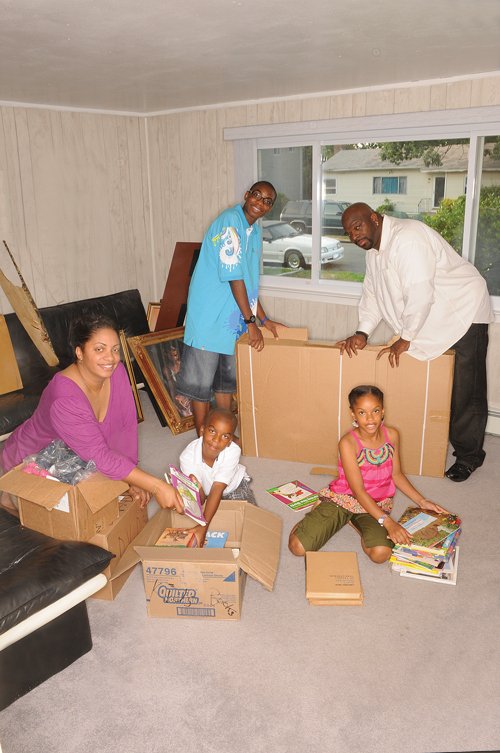 For the Henry family, paying rent was a Â­no-win situation.

“We had to start building a future for ourselves, for our children, and that starts with owning, not just throwing money out the window with rent,â€ says first-time homebuyer Angela Henry.

In spite of falling property values and a depressing economic climate, Angela, 44, and her husband Doliviera, 43, remain optimistic about the long-term benefits of homeownership. They believe that owning a home will facilitate intergenerational wealth transfer for their three children: Donte, 15; Tatiana, 8; and Justin, 7.

The Henrys purchased their three-bedroom, one-bath ranch-style home in Copiague, New York for $204,000 last July. They were able to negotiate the price down from $212,990 saving them nearly $9,000. What’s even more remarkable is that they are only paying 1% interest on their 30-year-fixed loan using a unique mortgage product offered through the Neighborhood Assistance Corporation of America (NACA), a nonprofit, community advocacy and homeownership organization that provides loans to low- and moderate-income first-time homebuyers or subprime borrowers. To be eligible for the program potential homebuyers must attend a NACA workshop, and later occupy their home for as long as they have a mortgage through NACA. They must participate in at least five volunteer activities each year and applicants cannot own other property at the time they apply. There are no income requirements, however NACA has purchase price limits, and buyers must purchase within a NACA service area.

Securing a mortgage through NACA saved the Henrys thousands of dollars. These days, traditional mortgages require a 20% down payment. Borrowers who come up short are generally required to take out private mortgage insurance (PMI) until they establish 80% equity in the home. NACA mortgagers don’t pay (PMI), however members pay a $50 monthly membership fee, which is factored into their monthly mortgage payment. The fee is paid for five to 10 years (depending on the loan amount). Those funds become available if borrowers are ever at risk of losing their home.

NACA applicants aren’t required to put forward a down payment. Instead, members have the option of buying down their interest rate. The Henrys used $28,015 from Angela’s retirement account to buy down the rate from 4.65% to 1%–a monthly savings of nearly $400. They were also able to avoid some of the typical closing fees; the Henrys closing costs were just $3,713.

“For a little more than we were paying for rent we have a home with a yard,â€ says Angela of their monthly mortgage payment of $1,315.06, just $307 more than they were paying for a cramped two-bedroom apartment in Queens, New York.

Though NACA played a big role, the Henrys new home was also made possible by the family’s pledge to eliminate debt, develop a consistent savings pattern,Â  and create a fully loaded emergency fund. “You have to be realistic about what you can afford as well as what you can maintain,â€ says Doliviera, a materials management rep for the New York City Housing Authority. It also required an important step in their relationship. Although the couple had been married for nearly 10 years, they maintained separate bank accounts. “We knew that to build together, our finances needed to be consolidated,â€ says Angela, an order support clerk for the United States Postal Services. With a combined annual salary of $110,000, they opened a joint savings and a checking account in April and enrolled in online banking with an automatic bill payment option. The Henrys’ timing could not have been better. Since they had a signed contract before April 30, they qualified for the first-time homebuyers’ tax credit of $8,000. They plan to use the money to pay down the principal on their loan. “It was a process, but like anything else, if you want it there are steps that you have to take. It’s not just going to be handed to you,â€ says Doliviera.

THE HENRYS’ ADVICE
-Â There is no “Iâ€ in team: I realized that combining finances was the only way things were going to work,â€ says Doliviera, who recommends weekly meetings with your spouse to hash out any unforeseen expenses and to anticipate new spending on the horizon. For couples who are not sure about combining their finances Doliviera recommends Love and Respect: The Love She Most Desires; The Respect He Desperately Needs (Integrity Publishers; $22.99) byÂ  Emerson Eggerichs.

-Â  Work with Professionals: “Being a member of NACA far outweighs anything. Besides all the money you save it’s so beneficial to have all the knowledge that they give you,â€ says Angela. After attending NACA’s homebuyer workshop you are paired with a mortgage consultant who helps you prepare financially for homeownership. Their network of agents will help you to find a house and negotiate. NACA (www.naca.com; 888-302-NACA) also provides approved home inspectors, rehab assistance,Â  and a post-purchase counseling program.

– Choose the right neighborhood: Doliviera wanted to ensure that he and his family would be in a safe neighborhood with good schools and easy access to public transportation. By accessing websites such as www.mlsli.com and www.listingbook.com he was able to get a breakdown of the demographics of the neighborhood. Another online resource on everything from population demographics to weather patterns and crime statistics is www.City-Data.com.