These Franchise Partners Are One of a Kind 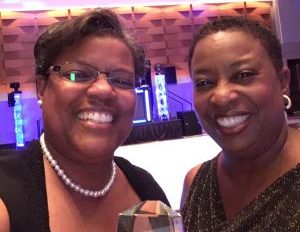 Although Littie Brown and Karen Brown (no relation) share a lot in common–last names, love of golf, and their home church, it is their differences in experience and personalityÂ that make them thriveÂ in the male-dominated business of wide format printing. But why are they one of a kind? Because Littie and Karen are the only African American female owners today in the SpeedPro Imaging franchise. SpeedPro Imaging is known for manufacturing graphics for the advertising industry. TheirÂ studios create large format graphics such as vehicle wraps, wall murals, and trade show graphics for businesses to some of the largest companies in the U.S.

Littie’s story isn’t uncommon as it relates to becoming a franchise owner. She worked in corporate America for 35 yearsÂ as a regional vice president in a large industrial supply company and with Xerox. When her corporate career had run its course, she was ready for something different. She connected with a franchise consultant, who worked with her to understand what her interests were and the investment level she was comfortable with. Littie knew she wanted a business in the B2B space and nothing in food or cleaning. Her consultant suggested she take a look at SpeedPro Imaging, as he knew Littie had a good understanding of the printing industry based on her experience with Xerox.

AlthoughÂ Littie was not familiar with the SpeedPro brand, she liked that it was on the leading edge of specialized printing. As Littie was pursuing this opportunity, she began sharing the idea withÂ Karen, at church and on the golf course. Karen was a project manager with an architect firm for 25 years and an expert in the field. The recession hit, and gave her pause to consider other life paths.

They both liked the fact that most of the franchise owners at SpeedPro had corporate backgrounds and prior executive experience. And it just so happened that there was a SpeedPro Imaging resale available in Marietta–just minutes from Karen’s house! In 2013, they jumped in with both feet. It took about six months from when they first became aware of the store, to negotiating and signing the deal.

I asked Littie and Karen if being the only African American female owners in the franchise, as well as being females in a majority male-dominated industry effectsÂ their business in any way. They both agree that it does, but in quite a positive way. They are certified as a Minority-Owned Business and a Woman-Owned Business which enables them to expand their reach, bid on projects or contracts that others may not,Â and because most of their clients are men, they feel they bring a unique perspective to projects or proposals that may not have considered. They are also able to support young adults by providing both employment and internship opportunities at their studio.

In terms of advice for potential business owners, Littie and Karen offer some excellent insights!

Lastly, IÂ just had to know how these ladies had the courage to leave such long-standing careers and get into a business where they clearly stood out; one word: BELIEF. They believed that what they were doing was the right thing for them. They didn’t allow fear to rule their decision. Fear will never get you to where you want to be. One of the key ways to eliminateÂ fear is to develop a plan, says Littie. We all agreed that there really is no such thing as “job security” when you work for someone else, so don’t let someone else make the decision for you. Karen asserted that if you’re not comfortable leaving your full-time job, start a business on the side until you’re ready to make the transition. Now you know why Littie and Karen are indeed, one of kind.

earned a degree in sociology from UCLA with a specialization in urban studies and business. Her first business was a partnership in aÂ small record label right out of college. After working with a few tech startups, she concluded her career in the corporate world with 14 years at Sprint,Â a majority of that tenure as a director of customer and sales operations. Nancy started NValuable Franchise Consulting, in order to provideÂ free consultation, relevant insight, pertinent and candid feedback toÂ her clients, so they are able to confidently purchase the rightÂ franchise. As a result, her clients achieve financial independence andÂ a positive, enduring impact on their families and local communities.