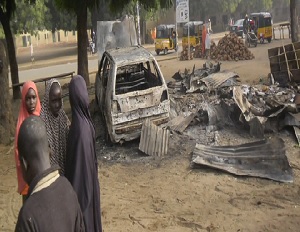 While last week’s deadly terror attacks in France made breaking headline news, many are scolding mainstream media for their delay, or in some cases lack, of coverage around the Boko Haram attacks in Nigeria that have reportedly killed thousands.

With hashtags like #Nigeria2000, #IAmNigeria and #NigerianLivesMatter surfacing on Twitter in an effort to bring awareness around the deadly attacks, social media is once again taking matters into their own hands to ensure that the uproar in Nigeria will not be swept under the media’s rug.

Below is a list of 8 facts you should know about the ongoing terror attacks in Nigeria and the country’s relationship with Boko Haram.

1. On January 3rd, hundreds of Boko Haram gunmen invaded the town of Baga, Nigeria and its neighboring villages, causing a deadly uproar that lasted for days. While there have been conflicting reports in regards to the death toll, some local officials fear that as many as 2,000 people are dead from the attacks that have continued throughout last week.

2. The group reportedly used three young girls, around the age of 10, as suicide bombers to help with the attacks. Using children as attackers has become a documented trend practiced by Boko Haram, with many of the children likely being kidnapped and later used as soldiers and bombers.

3. Boko Haram is a militant Islamist group that forbids any political or social activity associated with Western society, including voting in elections, wearing shirts and trousers, or receiving a secular education. They have regularly attacked northern Nigeria since 2009, and last year alone they killed more than 10,000 Nigerians.

4. The name Boko Haram means “Western education is forbidden,” and they are the group responsible for the April 2014 kidnapping of over 200 Nigerian school girls.

5. According to authorities, approximately 200,000 people have fled Nigeria to neighboring areas such as Cameroon, Chad and Niger.

7. Boko Haram has also sent threats to Cameroon, and on Monday morning, a five-hour gun battle erupted between members of the Islamist group and soldiers from Nigeria’s neighboring country. Reportedly 143 Boko Haram members were killed in the battle.

8. The United States State Department believes that Nigeria’s election next month is a leading factor behind the increases in attacks by the Islamist group who wants control over the country. According to State Department spokeswoman Marie Harf, Boko Haram has previously used election events to stir up tension in the country, indicating that their latest attacks are nothing new. Nigeria’s February 14th election is expected to be a close race between President Goodluck Jonathan and his opponent Muhammadu Buhari.