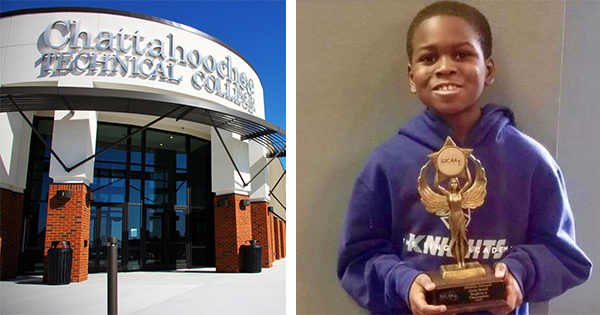 Caleb Anderson, a 12-year old gifted boy from Georgia, has already finished his first year in college and has just started his second year. He is majoring in Aerospace Engineering at Chattahoochee Technical College.

Caleb was just 9-months old when he learned to sign more than 250 words. He eventually learned to speak and read when he turned 11-months old. Aside from the English language, he also learned Spanish, French, and Mandarin.

Caleb’s parents, Claire and Kobi, knew he was special and has been very supportive of him ever since.

“As we started to interact with other parents, and had other children, then we started to realize how exceptional this experience was because we had no other frame of reference,” Kobi told CBS News.

At the age of 3, Caleb qualified for MENSA. He joined at the age of 5, making him the youngest African-American boy to be accepted at that time.

Caleb has exceptional from elementary to middle and high school. His mother said Caleb thought those were boring and not challenging so he wanted to go to college already and he was enjoying it so far.

“It was exactly how I expected it to be like if I were 18 or something,” Caleb said.

Caleb has 2 other younger siblings, Aaron and Hannah, who are also gifted. Their parents are all proud of them and encourage other parents to nurture their children’s potential.

Moreover, Caleb is set to graduate at the age of 14. He says that he plans to continue his studies at Georgia Tech as well as MIT.