Preview Our World: Back on Track With Marion Jones 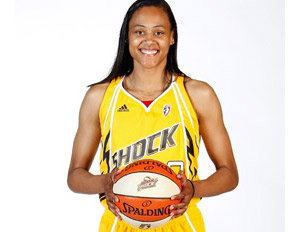 This week on Our World with Black Enterprise, host Marc Lamont Hill sits down with wife, mother and world-class athlete Marion Jones, who is back with a new book and career as a point guard for the WNBA’s Tulsa Shock. Hill speaks with Jones on the heals of her sharing her experiences before a live audience of more than 750 business and professional women at the 2011 Black Enterprise Women of Power Summit in Orlando.

Jones talks candidly and openly about having to forfeit her five medals from the 2000 Summer Olympics in Sydney, Australia, for using performance-enhancing drugs and serving six months in prison for lying to federal prosecutors. After her release from prison, Marion sought to take her experiences and encourage others to learn from them. She is actively speaking to teens and other groups and spreading her “Take a Breakâ€ message through which she advises young people to stop, take a break, think and seek proper advice from people they trust and who have their best interests at heart before making critical decisions that will have a profound impact on their lives. Jones shares her journey from celebrated role model, to disgraced athlete, to recovery and redemption in her book, On The Right Track: From Olympic Downfall to Finding Forgiveness and the Strength to Overcome and Succeed.

In this week’s On The Record segment, Hill talks with Barry Scheck, an attorney for The Innocence Project; Monifa Bandele, a program manager at the National Coalition on Black Civic Participation; and criminal trial lawyer and activist Michael Coard about African Americans in the criminal justice system.