This Week in Politics: Unemployment Drops, VP Debate a Draw 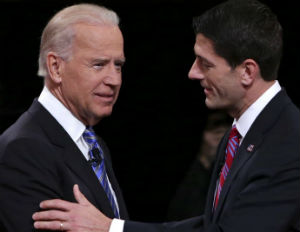 Job numbers released last Friday show that the unemployment rate dropped to 7.8%, down from 8.1% a month before. A survey done by the Bureau of Labor Statistics found that 873,000 people gained jobs, which is the largest one-month gain in more than nine years. Some of President Obama’s critics found these numbers literally too good to be true, but the Labor Department dismissed claims that it was manipulating figures.

Some important numbers were also released Monday: poll numbers. A Gallup poll showed that in the days following the debate, registered voters were evenly split between Obama and Mitt Romney. By comparison, in the days leading up to the debate, Obama had a five-percentage-point edge on his Republican challenger.

Seizing on Romney’s comment that he loved Big Bird but would cut funding to PBS, the Obama campaign released an ad that featured the famous Sesame Street character. The Sesame Workshop requested the campaign pull the ad, stressing that it is a nonpartisan organization and does not “endorse candidates or participate in political campaigns.â€

Someone who does endorse candidates? Stacey Dash. The Clueless actress was the subject of some racial backlash after tweeting, “Vote for Romney. The only choice for your future.â€ Dash defended her endorsement on CNN’s Piers Morgan, saying that she chose Romney “not by the color of his skin, but the content of his character.â€

It has been found that the deadly attack on an American consulate in Benghazi, Libya, was not a random act of violence over an anti-Muslim film, but rather a premeditated terror attack. This week, President Obama admitted that his administration gave incorrect information to the public, but only because they were reporting what they knew at the time. There was congressional hearing on Wednesday about the amount of security at the consulate, and the attack has also been brought up on the campaign trail. An Obama team member accused the Romney-Ryan campaign of making a “political circusâ€ of the attacks; Romney retorted that Obama’s team was not taking the issue seriously.

There is no consensus on the winner of the vice presidential debate; however, most can agree that this discussion was much livelier than the one between Obama and Romney last week. Biden came out swinging, and managed to bring up Romney’s tax returns and the “47 percent.â€ Ryan’s demeanor was notably more restrained, and he attacked the current administration’s foreign policy and tax practices. While this was the single vice presidential debate, Obama and Romney will meet again on Tuesday night.