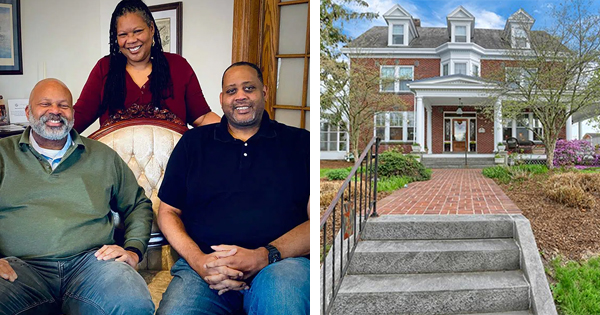 Meet the three entrepreneurial siblings — Patrick, Christine, and Stephen Campbell — who have purchased a century-old home and transformed it into what is now Keystone Inn, the first-ever Black-owned bed and breakfast in Gettysburg, Pa.

In August 2020, the Campbells bought the 109-year-old home to fulfill their dream of having a house that is big enough for them to host family gatherings during the holidays. The siblings personally oversaw its renovation, making sure of the safety of their guests.

“Patrick being a strong businessman, Stephen an architect … and myself having run housing programs for people with special needs for more years than I want to count — we thought that we would make a great team,” Christine told York Daily Record.

The historic home has been renovated to keep its nobility while also complimenting state-of-the-art technology. The house’s garage was remodeled to cater to small meetings and gatherings. The kitchen and dining area were reconstructed, perfect for preparing delicious breakfasts for their guests and to make a larger space while keeping the original central fireplace.

The Campbells also made sure to put keen attention to the details of the guest rooms. Each room is designed with themes from the Civil War and named for a historical character. One of the rooms honors the Reasor Family, the original owners of the house who were local furniture makers.

For more information and/or to book a reservation at Keystone Inn Bed and Breakfast, visit KeystoneInnPA.com.