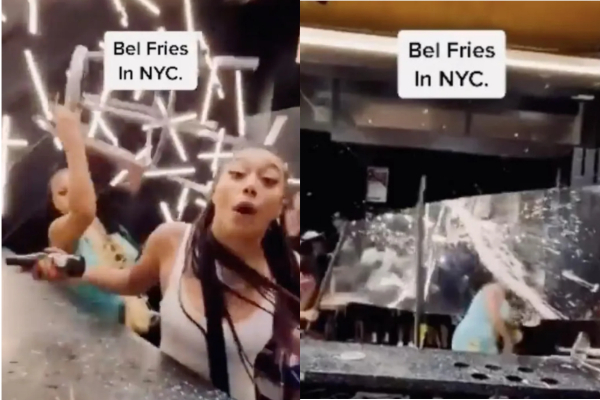 Three women were arrested and are facing felony charges for attacking two restaurant workers over a $1.75 charge for extra sauce.

The unnamed workers were hit with glass bottles that left lacerations after telling the women it would cost an extra $1.75 for additional dipping sauce. One worker filmed the now-viral video that shows the culprits ripping apart anything they could get their hands on and throwing it at the workers.

A crowd gathered behind the women cheering them on and filming while the restaurant’s security alarm did nothing to stop the attack. The eatery’s owner wasn’t present during the attack but woke up to the video the next day.

“Two of my employees were hit in the head with glass bottles,” owner Annalee Schlossberg said.

“There’s something going on with them, and it didn’t have to do with us, clearly, because it was over sauce. That shouldn’t call for that behavior,” she added.

Repost
Bel fires in NYC. Unclear how this started or what day it was on . #news #NewYorkCity #NYC pic.twitter.com/jQ9voIhblW

The women, all in their 20s, were later released. Ozario was the only one who had to post bail for claims she stole $10 from the register and punched one officer in the face during the arrest.

Schlossberg also calls out the witnesses who watched the melee and cheered on the enraged trio instead of stopping them.

“As mad as these women were, as crazy as they were acting, I think that was egging them on,” Schlossberg said.

The restaurant was closed for three days due to the $250 worth of damage the ladies caused, the NY Post reports. On Thursday, Bel Fries reopened for business.

“My No. 1 priority is making sure all of my employees are not only physically OK but mentally OK,” Schlossberg said. “I know they’re suffering from traumatic shock from the event.”