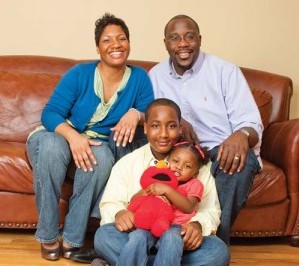 When Terry and Tyra Johnson got married five years ago, they decided to play an active role in managing their family finances. When it came to budgeting, the Yardley, Pennsylvania, couple refused to take a “set-it-and-forget-itâ€ approach; instead, the Johnsons agreed to regularly review the amount of money flowing in and out of their home.

One of the first big changes Terry made: “We used to get large tax refunds at tax time, but later I realized we were just giving the government a tax-free loan,â€ he says. “I forecasted our taxes for the year with our salaries and based on the deductions I know we’ll have for the year, I adjusted our withholdings accordingly.â€

Terry, 31, is an attorney in the labor and employment division at a law firm in Princeton, New Jersey. Tyra, 34, works mostly from home as a coordinator for a background screening company. She is also pursuing a graduate degree in counseling and cares for the couple’s two children, Jeremiah, 13, and Amaris, 2.

Prior to Terry accepting his post in January, he spent about $350 a month commuting to work and his total travel timeÂ  was more than two hours.

“Some of the costs included train fares, gas, parking fees, and other expenses not reimbursed by my employer,â€ he says. His commuting expenses now total less than half that, and commuting to work now takes him about 25 minutes each way.

Despite a slight increase in income and the decrease in expenses, with Terry’s new job, the Johnsons are determined to remain on course with their initial financial credo–spend less and save more.

With a monthly mortgage payment, credit card debts, car loans, student loans, and two children to care for, their monthly expenses come to roughly $8,000 per month. Even with a combined annual household income of $250,000, the family remains faithful to a frugal lifestyle and to whittling away their outstanding debts. Terry and Tyra formulate a budget each month and often plan one month ahead of time, so as not to get caught off guard by an unexpected bill, Tyra says.

“I write down all of our recurring monthly expenses and any anticipated additional spending for the current month as well as the next one,â€ says Terry. “We try to avoid putting any purchases on our credit cards that we can’t pay off in the next month or two.â€ The game plan seems to be working. In 2006, the family had more than $20,000 in credit card debt–stemming mostly from Terry’s seven years of undergraduate and law school. With a rigorous academic schedule at Rutgers University Law School, he could only work a part-time job and relied heavily on credit cards to pay miscellaneous expenses not covered by his student loan or partial scholarship. The Johnsons now have less than $5,000 in outstanding credit card debt and have developed a plan for paying it off by the end of the year. “We always pay on time to avoid unnecessary late fees and pay more than the monthly minimum payment,â€ explains Terry. They also use what they call “found moneyâ€ to pay down balances, such as bonus money and income tax returns. “I expect that we will be credit card debt free before 2011 is over.â€

In another early example of cost cutting by the Johnsons, they hired a family friend to care for their daughter shortly after she was born.

“We paid a friend about $125 per week to care for our daughter,â€ says Tyra. “This was substantially less than what an average daycare center would have cost us.â€ The family recently placed Amaris in a traditional daycare, which costs about $860 per month compared to other rates that exceeded $1,000 per month.

However, as the family grows, the need for more or enhanced essentials becomes apparent. For example, “Since our daughter was born, we could use a larger SUV to transport her to and from daycare and elsewhere,â€ Terry says. “We have delayed the purchase until we pay off the two vehicles we already have–which should be later this year.â€

As the Johnsons continue to economize, they’ve also postponed some minor improvements to their home–including a backyard fence and some internal decorating that would have cost them around $2,500.

“We want to eliminate most of our debt by the end of this year, and we are committed to doing this,â€ Terry says.

How They Did It

– Use state-of-the-art software. In tracking their spending habits, the Johnsons use TurboTax software. They also use the Internal Revenue Service website and the paycheck calculator at Paycheckcity.com, at which users can, among other things, determine tax and withholding amounts.

“I was able to adjust my federal withholding amount to coincide with my new salary,â€ says Terry. Additionally, he is able to accurately amend his family tax liabilities on the basis of changing state and federal tax codes.

-Â  Telecommute to save money. Tyra says working from home is a “tremendous savingsâ€ for the family. “Telecommuting provides flexibility and savings for a young, growing family like ours,â€ she says. “It’s especially significant now that my husband’s commuting costs have been cut in half with his new employer.â€ Tyra estimates that she saves about $350 a month.

– Delay major purchases. By providing routine maintenance and care on their existing vehicles, the Johnsons ensure that their vehicles will last. “Our decision to delay purchasing a new automobile is inclusive of our budget philosophy and living within our means,â€ says Terry.

-Â  Give generously, but pragmatically. For the Johnsons, living within your means shouldn’t mean forgoing charitable support for your community or helping those in need. “For us, the key to financial prosperity is adhering to the biblical command to be a good steward of our money–including supporting our church and community while still maintaining a frugal lifestyle,â€ says Terry. The Johnsons tithe 10% of their income to their church. Â Â