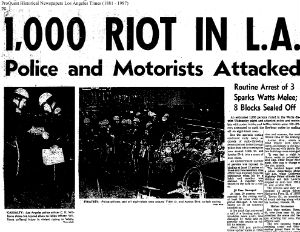 Fifty years ago in 1965, a traffic stop in Los Angeles changed history and sparked a revolution. Riots broke out in Watts over the arrest of an African American driver and a whole portion of the city was destroyed, 34 lives were lost, more than 1,000 people were injured, and more than $40 million of property damage was left in the aftermath.

As the story goes, Officer Leo W. Minikus pulled over 21-year-old Marquette Frye on suspicion of drunken driving. His mother and brother showed up at the scene, a verbal confrontation occurred, and all three were taken into custody.

“It was his mother who actually caused the problem,” Minikus told The Los Angeles Times in 2005, recalling that day. “She got upset with the son because he was drunk. He blew up. And then we had to take him into custody. After we handcuffed him, his mom jumped on my back and his brother was hitting me. Of course, they were all arrested.”

“We were arrested together, the three of us. Marquette and Ronnie were coming home from seeing friends,” PriceÂ said. “The police pulled them over. One of the neighbors came and got me. I went out to see what was going on. They took us down. They handcuffed us and took us to the station. I didn’t know about any of the rioting until my daughter came and got me out of jail at 7 Â the next morning. I was surprised. I had never heard of a riot. There were never any riots before. I went back home to my house. Where else was I going to go? [The arresting officers] lied. They said he was drunk driving, but he wasn’t drunk driving.”

The riots of that night led to a face-off between the surrounding African American community and police, with activists and leaders highlighting issues of discrimination and mistreatment of people of color at the hands of white law law enforcement. History would repeat itself in the spring of 1992 after four white Los Angeles police officers were acquitted in the 1991 beating of black motorist Rodney King. After the smoke cleared, more than 50 people in the Los Angeles area were dead, 2,000 injured, and there was more than $1 billion in damages.