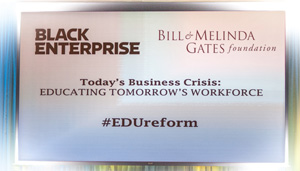 In BLACK ENTERPRISE‘s award-winning series of reports on the state of public schools, our editors defined the urgency of the situation by paraphrasing an old maxim: “In the 21st Century, the business of America is education.â€ It’s not just a mere play on words.Â  The reality is that nothing has become more vital to industrial competitiveness and advancement of corporations, large and small, than a literate, capable and critical-thinking workforce.

Judging by the stats on America’s school system, we have a failing grade: 70% of all American eighth graders cannot read at their level; a student drops out every 26 seconds; and according to Education Secretary Arne Duncan, 25% of our students fail to graduate on time with the figure for African Americans and Latinos at a staggering 40%.

Due to the critical assignment of repairing our schools, BLACK ENTERPRISE and the Bill & Melinda Gates Foundation formed a partnership to address this problem and recently launched the first of a series of forums, “Today’s Business Crisis: Educating Tomorrow’s Workforce.â€

The voting patterns that made it possible for President Barack Obama’s re-election signaled the nation is quickly becoming “majority minorityâ€ but school-aged children of color in urban hubs are not being prepared for the knowledge-based 21st Century workplace and, as a result, will not move forward. So it’s up to all so-called stakeholders — teachers, administrators, parents, students, civic advocates, non-profits and especially, business leaders to become full participants in finding a solution to this potentially crippling conundrum.

BLACK ENTERPRISE President & CEO Earl “Butchâ€ Graves, Jr. says in his opening remarks at the Nov. 7 Memphis-based event: “We must individually and collectively be accountable for the quality of public education, both for the health of our nation and its economy as well as for the viability of our respective enterprises. Indeed, the education of tomorrow’s workforce is not just a social crisis, or a human-interest crisis, or their crisis. It is a business crisis. It is our crisis. [We must fix] the American Public Education System because it is broken and we are all accountable for its repair. We must stop waiting for Superman and put on our own capes and get to work.â€

“Our purpose today is to help galvanize business leaders, African American business leaders in particular, to play a larger role in creating the solutions necessary to ensure that inner-city high school students, the overwhelming majority of whom are of color, graduate readily to succeed and prepare to earn post-secondary degrees,â€ he continues, speaking before an audience of more than 100 — plus more than 136,000 accounts reached on Twitter. “I can think or no better city to have this discussion today than in River City, with its long and storied legacy as a battleground for civil rights of which public education is among the most basic. Memphis is also the site of some of the Gates Foundation’s most ambitious work, as well as the home of dedicated educators determined to change public schools for the better.â€

Dr. Kriner Cash, superintendent of Memphis City Public Schools, echoed the need to raise students’ competitive levels.Â  In recounting a speech from renowned columnist Thomas Friedman, Cash maintains that “it’s no longer about cheap labor, it’s about cheap genius…The day of average is over. The day of the low-skilled but high-paying job is over. It is no longer about satisfactory in our job performances, and in our work, and in our inspiration and teaching to our young people. It’s only about good, better, and best. We have to move rapidly now from stack-and-pack to the head of the class in world knowledge economy. It’s how much you can innovate. It’s how much you can create, and what is the value add that you bring to your workplace and to your role.â€