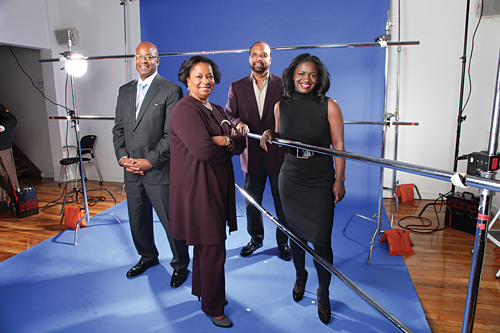 One high-powered entrepreneur creates imaginative campaigns for major-league clients to reach any constituency. An enterprising executive finds new ways to communicate the value of buying and selling products online. Another power player boosts sales for a beverage giant by connecting with new audiences through music and technology while his peer bridges the cultural gap, marketing pharmaceuticals from here to Mumbai. Meet GlobalHue’s Don Coleman, eBay’s Richelle Parham, PepsiCo’s Frank Cooper III, and Merck’s Charlotte McKines. They represent just a sampling of the innovators found on our latest exclusive roster: Black Enterprise’s Top Executives in Marketing & Advertising.

For this groundbreaking list, our editors selected more than 100 of the highest-ranking and most influential execs who have positioned the world’s most valued brands, engaged consumers, and generated millions in revenues in the process. Ranging from C-suite corporate professionals to be 100s CEOs, some have created ads that move millions to act while others have targeted influential segments of our multicultural world. These men and women are among chief marketing officers, senior vice presidents, senior media directors, creative directors, brand strategists, and other such business leaders overseeing multimillion-dollar campaigns, controlling media buying, and creating new audience development strategies.

Why did we choose to develop such a list now? “The rules have changed,â€ asserts PepsiCo’s Cooper, responding to generational shifts and a society driven by social media and other emerging platforms. Moreover, we found it vital to shine a spotlight on today’s generation of leaders as the sector undergoes a major transition. For example, the Advertising Educational Foundation, forecasts that ad spending targeted at minority audiences is expected to jump significantly as 2010 Census data is revealed. This development should be good news for African American advertising agencies. However, such firms continue to face pressure from general market firms, which have been developing in-house multicultural shops as they lose ground in media buying and engage in less lucrative consulting and creative jobs. On the corporate front, trade associations and publications continue to admit that African Americans remain woefully underrepresented. On the following pages, you’ll find a list of executives and entrepreneurs seeking to raise the game, make new inroads, and become a transformative force within the industry.

METHODOLOGY
To select our top executives in marketing and advertising, BE’s editors sought to identify the highest-ranking and most influential corporate professionals and entrepreneurs in the field. As part of our comprehensive search, our editorial researchers contacted the nation’s leading 100 U.S. advertisers, the top 100 global marketers, and general market advertising firms, as well as reviewed our proprietary database of the nation’s largest black advertising agencies developed by be Research. We further consulted scores of advertising experts and marketing consultants, contacted top officials at and reviewed materials from leading trade associations, and pored over hundreds of biographies and rÃ©sumÃ©s.