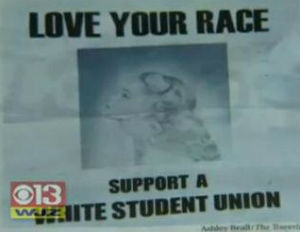 A white student at Towson University in the suburbs of Baltimore, Maryland has stirred up controversy after he called for the creation of a white student union at the school.

Matthew Heimbach, who has been pictured holding a Confederate flag, has stated that he wants a white student union so white students can support and protect each other.

He claims the town where the college is located has seen an increase in non-white individuals committing crimes against whites.

The university’s student population is 68 percent white and 13 percent black.