Toyota USA: Giving Back to the Community 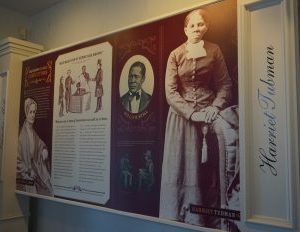 If you look at research conducted by IHS Markit, Toyota and their luxury brand Lexus are favorites among African, Hispanic, Asian and Native American consumers. This fact was awarded when Toyota was honored for their diversity efforts at the Annual Diversity Volume Leadership Awards (DVL) at the North American International Auto Show in Detroit. The DVL Awards are presented by the National Association of Minority Automobile DealersÂ and IHS Markit. Instead of taking this enormous cultural brand equity for granted, Toyota has demonstrated its desire to become an even more integral part of the colorful fabric of America.

For Black History Month 2017, Toyota Motor Sales, USA, showed a small group of journalists, through a four-day tour of historic African American sites that they do indeed give back to multicultural communities through charitable donations and a strong sense of community.

The tour started in New York State, where we drove a fleet of 2017 Toyota sedans and SUVs to Villa Lewaro in Irvington, New York, the estate of the first American female and African American female millionaire, Madame C.J. Walker. We received a guided tour from Senior Field Officer Brent Leggs, with the National Trust for Historic Preservation. Leggs shared the rich history of the woman and the estate she built.

Madame Walker was renowned for her keen entrepreneurial sense, having developed haircare products for black women.

The name Villa Lewaro was coined by using the first two letters in the first, middle and last names of her daughter, Leila Walker Robinson, who later changed her name to A’Lelia Walker. The estate was designed and built by black architect Vertner Tandy.

Walker used the 34 room mansion as a meeting place to discuss race relations. Upon her death, just about a year after moving in, the estate was bequeathed to her daughter A’Lelia Walker, who owned the home until her death in 1931. After her death, Villa Lewaro was bequeathed to the National Association for the Advancement of Colored People (NAACP). The NAACP sold the home the same day it took ownership, and the proceeds from the sale of Villa Lewaro were a financial savior to the NAACP, which at the time was on the verge of bankruptcy. In 1993, Villa Lewaro was sold to Harold Doley, former U.S. Ambassador to the Ivory Coast and owner of the oldest African American-owned investment-banking firm, Doley Securities L.L.C. The house became a National Historic Landmark in 1976, and Toyota has supported the restoration of the home through generous donations to the National Trust for Historic Preservation. Ambassador Doley and his wife Helena painstakingly restored Villa Lewaro over a 20-year period.

From the Walker Estate, I drove the 2017 Toyota Avalon to Harlem in Manhattan, New York. The Avalon is the flagship sedan for Toyota, and Harlem was the flagship community for black writers, singers, musicians, athletes, poets and religious and community leaders in the early to late 1900s. It was in Harlem that we took a walking tour of The Harlem Renaissance, conducted by Neil Shoemaker, who refers to himself as ‘Mr. Harlem.’ Shoemaker discussed significant figures and places in Harlem’s history, such as Malcolm X, Muhammad Ali, Duke Ellington, Ella Fitzgerald, the Apollo Theater, the Cotton Club, the Audubon Theater, Joe Frazier’s Gym, and many more. Harlem’s history is well documented, and it felt like we had gone back to those glorious days of its cultural peak during the walking tour. We capped off the Harlem tour with a night of dining and jazz at legendary Minton’s Jazz and Supper Club.

The next morning, I drove a 2017 Toyota Highlander from New York to Philadelphia to learn about more black history. The Toyota Highlander is a superb SUV, capable of toting large families and their gear safely and comfortably. I was impressed with the more than 30 highway mpg achieved during the two-hour drive to ‘Philly.’

Our first stop in Philadelphia was the Mother Bethel A.M.E. Church, located just a few blocks from Independence Hall. At the Church, Docent Peggy McGraw recalled the rich history of Mother A.M.E. Bethel, and the impact it has had on African American lives for hundreds of years.

Mother Bethel A.M.E Church was founded in 1794 by Bishop Richard Allen, born a slave in 1760. After buying his freedom, Allen began preaching and that led to the construction of three churches prior to the construction of the current sanctuary dedicated in OctoberÂ 1890. Mother Bethel continues to serve as an active participant in the spiritual, social, and civic causes germane to African Americans and people of color. Mother Bethel A.M.E. is the oldest continuously black-owned property in the United States.

Our next stop on our Black History Month tour was the Belmont Mansion in the suburbs of Philadelphia. Now on the Philadelphia Register of Historic Places, the Belmont Mansion was a stop on the ‘Underground Railroad,’ which was neither a railroad or underground, but a series of trails and safe houses used by ‘Conductors’ to guide scores of slaves from the south to free states north and even into Canada. Harriet Tubman was the most famous Conductor to have stopped at the Belmont Mansion as she guided her people to freedom.

In JuneÂ 2007, the Underground Railroad Museum was opened at the historic mansion. Displays include numerous historical artifacts and documents, including an emotion-inducing slave Bill of Sale.

After a great cheesesteak lunch in South Philly, I took the wheel of a 2017 Toyota Camry for the final legs of our powerful, educational journey. The 2017 Camry is one of Toyota’s best-selling cars for good reason–it does everything wellÂ and was the perfect vehicle for travel to our last stop: The Smithsonian National Museum of African American History and Culture (NMAAHC) in Washington, D.C.

Before we visited the NMAAHC, we were present as Toyota Motor Sales, USA, presented a check for $10,000 to the National Trust for Historic Preservation, an organization dedicated to preserving our Nation’s historic treasures, like Villa Lewaro.

There is so much to say about my experience at the NMAAHC, it would take several more stories to complete. You start your journey there by descending by elevator into displays about the early days of the slave trade. As you descend, lights dim and you see a timeline on the walls denoting key years in the journey from slavery to freedom.

Over many thousands of displays, documents, photographs, video and movie presentations; and actual artifacts; the story of African Americans is told in a truly superb way. The remains from slave ships, including wood from a sunken ship and the recovered shackles used to bind adults and babies; an original, unrestored slave cabin; a Southern Railways rail car; an airplane flown by Tuskegee Airmen; a reproduction of a lunch counter where you can interactively feel what it was like not to be served because of your color; and so much more.

There are displays on war, politics, culture, music, sports, and all facets of black history. It’s truly a heart wrenching, yet remarkable experience designed to educate and enlighten.

Our trip with Toyota was an experience of a lifetime. It should be noted that Toyota Motor Sales, U.S.A. donated more than $3 million to the NMAAHC, another prime example of how Toyota gives back to the community. Thank you, Toyota.

FacebookTwitterYoutube
← 6 Qualities to Look for in a Strong Co-Founder ← Don’t Be a Relic: How to Maintain a Relevant Business
×