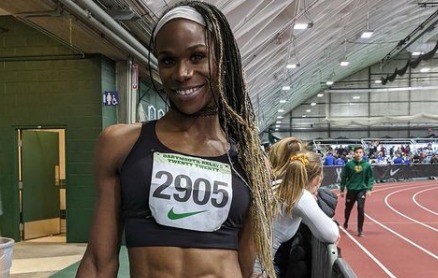 CeCe Telfer is a transgender athlete who aspires to pursue an Olympic dream of qualifying for the U.S. trials, then race in the 400-meter hurdles. Telfer must run the race in 56.5 seconds; her best time has been 57.5 seconds.

The New York Times profiled Telfer, who has received death threats on social media, once slept in her car, skipped meals and struggled to find a supportive training coach on the journey of pursuing her dream.

The determined 26-year-old has already started to make historic moves. Two years ago, she became the first openly transgender woman to win an NCAA title when she was fifth-year senior at Division II Franklin Pierce University, located in Rindge, New Hampshire.

Olympic historians say that no athletes at the Winter or Summer Games have publicly identified themselves as transgender when competing. Telfer told The Times that making Tokyo is “important for me to do it for my people— whether it be women, Black people, transgender people, L.G.B.T.Q. people—anybody who is scrutinized and oppressed.”

Telfer’s website revealed that the sprinter was born in Jamaica but raised in Canada.

“I started running track at a really young age, it was cultural and all Jamaicans have to do it. It’s in my blood. Track has always been apart of my life. I consider myself a well-rounded athlete. I cross-train with other sports, like volleyball, cheerleading, gymnastics, and tennis, to keep my head in the game,” Telfer said on the website.

Telfer has some supporters. Nicolette Zeigler is organizing a fundraiser for Telfer, who must travel to mostly self- financed track meets, since there is no sponsorship lined up yet. Telfer trains vigorously and works at a nursing home.

“Now I have an even bigger stage in my sight, Tokyo 2021. Please help me on my journey to the Olympics and to be the first Black female, in transition to compete at the Olympics,” the GoFundMe message reads. “The world is changing and it starts with me.”