Trump Ditches GOP Debate Because Fox News Made Fun of Him 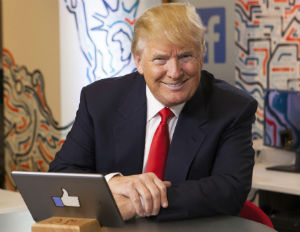 Trump’s hesitation to participate apparently stemmed from his distaste for Fox News host Megyn Kelly, who will be moderating the debate. As far as Kelly is concerned, the feeling is certainly mutual. Kelly incited the wrath of Trump when she grilled him on the sexist language he frequently employs against women who dare to disagree with him. The heated exchange that followed led to an awkward week of Fox News trying to find a balance between supporting their star host without alienating viewers who clearly couldn’t get enough of Trump.

Trump cited Kelly being “biased against him” as to why he would not participate in any debate she moderates. While this is certainly an interesting choice of words coming from the man who proudly discriminates against 1.3 billion people on the basis of religion, Trump clearly considers Kelly’s apparent “bias” to be a valid excuse to skip the last debate before primary season officially kicks off.

However, it wasn’t only Kelly’s “attacks,” that led the businessman to ditch the debate. After getting wind of Trump’s endless complaints, Fox News released the following statement:

“We learned from a secret back channel that the Ayatollah and Putin both intend to treat Donald Trump unfairly when they meet with him if he becomes president. A nefarious source tells us that Trump has his own secret plan to replace the Cabinet with his Twitter followers to see if he should even go to those meetings.”

Apparently this was the last straw for Trump. His campaign manager, Corey Lewandowski confirmed that Trump was “definitely not participating in the Fox New debates,” adding that “his word is his bond.”

BE Politics will be live-tweeting the prime time debate, airing on Thursday at 9 p.m. on Fox News. Follow us at @BlackEnterprise and join the conversation by using the hashtag #BEpolitics. We can’t wait to hear from you.