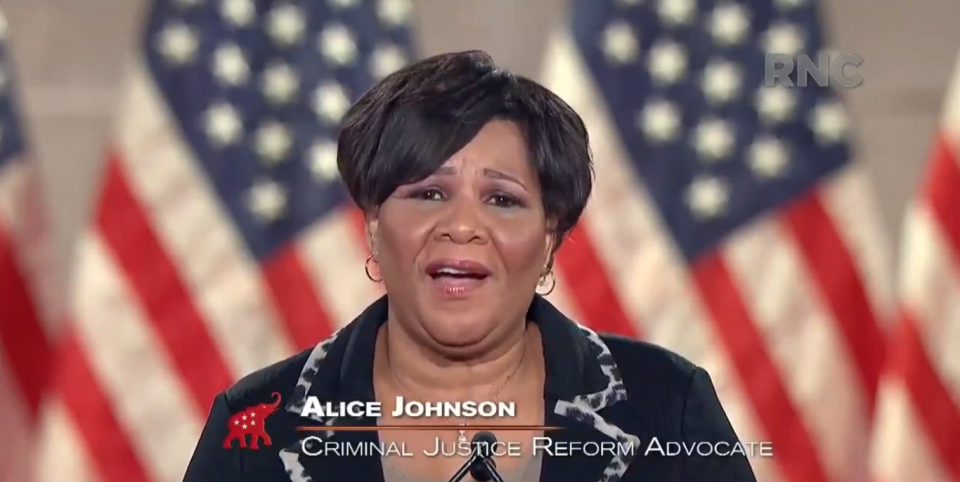 Alice Johnson first made news when reality television star and entrepreneur Kim Kardashian West pleaded for her release to President Trump as part of her work in criminal justice reform. Johnson had already served 21 years of a life sentence after she was convicted on drug charges when her case started to appear in headlines.

In 2018, Trump commuted the nonviolent, first-time offender’s sentence after Kardashian West spoke with him on the matter. On Friday, Trump granted Johnson’s request for a full pardon during a sit-down in the Oval Office.

“We’re giving Alice a full pardon. I just told her,” Trump said as he sat alongside Johnson. “We didn’t even discuss it. We just—you were out there; I saw you in the audience last night. And I asked the folks if you could bring Alice over, and we’re going to give a full pardon. We’re going to do it right now.”

“Alice had done an incredible job since she’s been out, and—recommending other people,” he added. “We said, ‘How many people are there like you?’ There’s only one Alice, as far as I’m concerned. But how many people are like you or your circumstance, where they were given this massive sentence? And they’re good people, great people. And she said, ‘So many. They’re in jail. So many.'”

Since her release, Johnson has become a criminal justice reform advocate. She appeared at last week’s Republican National Convention expressing gratitude to Trump for seeing her as a person and advocating for the First Step Act.

“It was real justice reform,” Johnson said, according to CNN. “And it brought joy, hope, and freedom to thousands of well-deserving people. I hollered, ‘Hallelujah!’ My faith in justice and mercy was rewarded. Imagine getting to hug your loved ones again. It’s a feeling I will never forget. And to think, this first step meant so much to so many.”